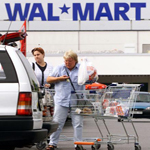 In 2004, Wal Mart was accused of locking its night shift janitorial staff in the store without any way out. Some of these workers were undocumented immigrants.
AP Images/Martin Meissner

In 2004, it came out that not all Wal-Mart's 1 million employees were legal residents of the United States and that many of the most vulnerable of the company's employees were being mistreated by the corporation.

Between 1998 and 2003, more than 350 undocumented workers were arrested during their shifts at Wal-Mart stores; officials caught 250 of them in a single-night, 21-state dragnet.

In a lawsuit filed by workers, the company was charged with forcing janitors to work seven-day-weeks for pay as low as $325 a week. The night shift janitorial staff was particularly mistreated in stores across the U.S. In 2004, the New York Times documented a "lock-in" policy that required that cleaning staff be locked in the store -- without an exit -- to prevent shrinkage and cigarette breaks.

The company maintained that a manager with a key was always on hand, but this proved false in some cases. One worker who broke a foot had to wait four hours for a manager to arrive and unlock the door so that he could leave to receive medical treatment; another worker had a similar experience, having to wait until the morning shift arrived to go to the hospital after cutting her hand with box cutters [source: Miller].