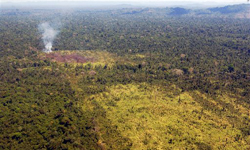 They're not in contact with the authorities and therefore can't tell anybody what's going on, so bulldozing the protected land of a remote Amazon tribe might seem like something a corporation can get away with.

Such was the case with Brazilian beef company Yaguarete Pora S.A. In 2009, they were found to have bulldozed thousands of hectares of protected Amazon forest land in Paraguay that belongs to the Ayoreo-Totobiegosode people. The Totobiegosode is one of the few remaining uncontacted tribes -- and through international agreement are entitled to its ancestral land [source: GCC]. Yaguarete Pora S.A. bulldozed the forest to create more grazing land for its beef cattle.

In addition to trampling on the rights of protected indigenous people, Yaguarete also broke the law by bulldozing the land without a proper license. The Paraguayan government revoked the company's license to operate in the country after it had been caught illegally bulldozing another tract of protected land [source: Survival]. After news of Yaguarete's rights violation spread, the company made an attempt to spin the crime by announcing it would set up a reserve of land for the Ayoreo-Totobiegosode; the company plans to leave alone 16,784 hectares (41,474 acres) of the 78,549 hectares (194,098 acres) of the Totobiegosode land it's illegally bulldozing [source: GCC].