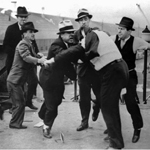 In 1914, Henry Ford decided to put "Jesus Christ in [his] factory" by introducing ethical standards to his employees in Dearborn, Mich. [source: Russell]. He organized the Sociological Department, a group of 50 employees tasked with interviewing employees, their families, neighbors and friends to determine if workers were using their wages ethically and morally, while resisting temptations like alcohol, gambling and tobacco. Those who didn't meet his standards weren't eligible for raises and promotions.

While the Sociological Department served largely as a moral spying arm of the company, it's also credited with helping workers with illness, debt and other quandaries unrelated to work.

Much less ambiguous is the nature of Ford's Service Department, a security and intelligence division. At a time when unionization was gathering strength as a practice, the Service Department spied on labor groups and employees, breaking up meetings and assemblies, and even roughing up workers and union representatives.

In 1932, at the Ford plant in Dearborn, Service Department members worked in concert with local police to break up an unemployment protest using machine guns; four unarmed workers were killed [source: Grevatt]. Five years later, the "Battle of the Overpass" took place, where Service Department employees beat up union organizers allowed at the plant to distribute leaflets.