by Dave Roos
Prev NEXT
3 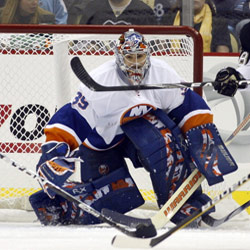 When we talk about professional sports with disgustingly high salaries, hockey is usually the exception. Maybe that's because we haven't been paying close enough attention: In 2006, for example, a young goalie named Rick DiPietro signed a 15-year contract -- the longest in NHL history at the time -- with the New York Islanders for $67.5 million. And those are American dollars, not the coins with a picture of a duck on them.

DiPietro had been with the Islanders franchise since 2000, when he was drafted out of Boston College at the ripe old age of 19. After a lackluster first season in the pros, the Islanders sent him back down to the minors for retooling. He came back strong in 2005, even earning a starting spot for the U.S. in the 2006 Olympics.

But just as DiPietro was hitting his stride, and just after he signed that whopper of a contract, his health went south. Unfortunately, goaltending -- like catching in baseball -- is notoriously tough on the knees. And despite DiPietro's youth, after a few quick seasons in the NHL, his knees have all the responsiveness of an arthritic septuagenarian's. As DiPietro rides the pine with an icepack on his lap due to knee swelling and a variety of other injuries, the Islanders continue to shell out $4.5 million a season. And thanks to the incredibly shortsighted long-term contract he signed, the team will continue to do so until 2021, even if DiPietro has to retire from his injuries [source: Raber]. And good luck trading him; his awesomely absurd contract will travel with him wherever he goes.