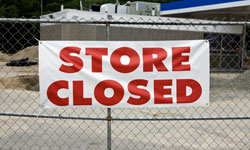 Are supernatural forces really to blame for these failures, or did the owners simply make lousy business decisions?

Small businesses are still the engine of the U.S. economy, and entrepreneurs still constitute the vast majority of employers. In 2007, an average of 497,000 new businesses were created each month in the United States [source: Fairlie].

If you're thinking about joining the ranks of the self-employed, then start by learning from the mistakes of others. The following is a list, in no particular order, of the 10 most common problems faced by new businesses.