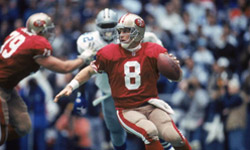 You're forgiven if your memory's a little hazy. The United States Football League was a rival football league launched in 1983 that actually snatched some stars from the NFL before folding under massive financial failure in 1987. In 1984, Steve Young was an All-American out of Brigham Young University who was courted by several professional clubs, including the Los Angeles Express of the USFL. But it was only the Express who offered him a $40 million, 43-year contract. Yes, a 43-year contract.

All right, technically it's a four-year playing contract for $5.9 million with an additional $34.5 million in deferred payments. How do these deferred payments work, exactly? Young signed the contract when he was 22. Starting at age 28, he would receive annual payments beginning at $200,000 and increasing to $3.173 million for the final payment of his contract, sometime in the year 2027 [source: Kirshenbaum].

But the most egregiously absurd clause of the contract on the owners' side is that they guaranteed these payments even if the USFL went belly up (which it did) or Young decided to flee for the NFL after he wrapped up his four-year commitment to the Express. So somewhere, Steve Young is shining his three Super Bowl rings (he backed up quarterback Joe Montana for his other two) and collecting a fat annual check for the three forgettable (but not regrettable) years he spent in Los Angeles.