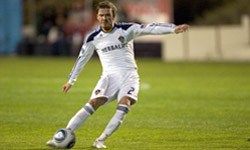 David Beckham is the most famous soccer, er, football player in the world. At age 34, after brilliant careers with Manchester United and Real Madrid, during which he won all sorts of championships and cups and other prizes that make little to no sense to anyone this side of the Atlantic, he stunned the world by signing with the Los Angeles Galaxy of Major League Soccer. The shock was less over his decision to play football, er, soccer in a country that routinely abandons the sport after junior high than the outrageous size of his contract: $250 million over 5 years.

Now, let's be fair. The $250 million turned out to be more of a publicity stunt than a cash guarantee. Beckham's complex contract includes lots of provisions -- cuts of jersey sales, ticket sales and endorsements -- that depend on both his and the team's performance. When you do the math, Beckham is only guaranteed to earn about $50 million for the entire five-year contract [source: Wahl].

Beckham may be ruggedly good-looking, but the man is well past his prime as a footballer. Since joining the Galaxy, he's been plagued by ankle and knee injuries that limited him to just five games in 2007 and have hobbled his effectiveness ever since. In his four seasons in America, he has scored just nine goals and tallied 16 assists. Los Angeles would've been better off investing that $50 million in Posh's clothing line.