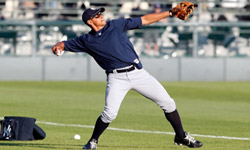 Professional athletes are worth every last penny they make. Yes, you heard us. Sure, pro athletes make millions and millions of dollars for playing a game, but the game pays back.

Let's take boxer Floyd Mayweather Jr., for instance. Mayweather made $65 million in 2010 just for punching another man in the face. On the surface, that's sounds absurd. But when you take into account that over 1.4 million people bought his fight against Shane Mosley on pay-per-view for a total of $78.3 million -- and that's just the one-time television revenue -- you start to see how sports math adds up [source: Rafael].

Another great example is Los Angeles Lakers guard Kobe Bryant, who made $48 million in 2010. Yes, Kobe is one of the NBA's reigning superstars, but should any man make 120 times more than the president of the United States for chucking a ball through a hoop? Absolutely not. But then you realize that Kobe's No. 24 jersey is the best-selling NBA jersey in the world (the world!) and retails at $45 a pop, with a large percentage of those sales going back the Lakers front office, and suddenly the ridiculous sounds a lot more reasonable [source: ESPN].

But then again, return on investment is a tricky thing. For a sports franchise to make stadium-loads of dough, they often have to throw large sums of cash at professionally unproven prospects. And in retrospect, what looks like a smart bet on a future superstar often turns out to be an egregiously bad business decision that sends the club spiraling into bankruptcy.

The following is our list of the 10 biggest contract catastrophes in professional sports, starting with Heisman Trophy-winning running back Ricky Williams.