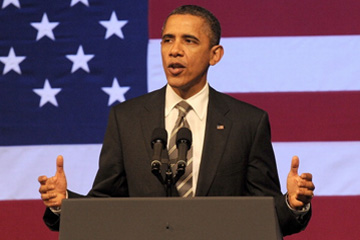 Critics of U.S. President Barack Obama and his economic policies often accuse him of being a "socialist." During the 2012 Republican presidential primaries, Newt Gingrich called the Obama presidency the first step toward "European socialism and secularism," while Mitt Romney said Obama takes his political inspiration from "the socialist democrats in Europe" [sources: Chafkin and Abcarian].

Taxes remain a central point of contention between Obama and his critics. The Obama administration fought unsuccessfully to let the Bush-era tax cuts expire at the end of 2010 for the highest income earners. The Republican-led opposition argued that higher taxes would further fuel runaway government spending on "entitlement" programs, namely Social Security, Medicare, Medicaid, unemployment benefits and welfare programs like food stamps and subsidized housing.

This relationship between taxes and social welfare programs drives the argument that taxes are essentially socialist. Let's make one thing clear, however: When Gingrich and Romney call Obama's policies "socialist," they're not equating them with the socialism of Soviet Russia or China under Chairman Mao. That brand of socialism is an economic system in which the state owns and controls "the means of production" (i.e. all industry) and there's no such thing as private property [source: Heilbroner]. Instead, Obama's critics equate his policies with the democratic socialism practiced in many Western European countries after World War II, including most Scandinavian countries, Germany, France, Italy, Spain, and to an extent, the United Kingdom [source: Nord].

How much do Europeans pay for such an extensive safety net? And how much does the federal government spend on its social programs? Find out on the next page.

How much higher are taxes in socialist European countries? According to 2009 numbers, the overall tax burden (an average of both personal and corporate income tax rates) in Denmark is 48.2 percent of Gross Domestic Product (GDP), the total value of all goods and services produced annually. The overall tax burden in the United States is roughly half that amount: 24 percent. Incidentally, that's the third-lowest tax burden of the 34 member nations of the Organization for Economic Cooperation and Development (OECD) [source: Calabresi]. The tax burdens of France, Germany and the United Kingdom are 41.9 percent, 37 percent and 34.3 percent respectively.

So let's get back to the question: Are taxes socialist? That depends on whether you equate taxes with government spending on social programs. Consider this: In 2010, 66 cents of every dollar of tax revenue in the U.S. was spent on the social safety net [source: Appelbaum]. In 2011, 68 percent of government spending went to Social Security, Medicare/Medicaid/Children's Health Insurance Program (CHIP), tax credits and programs for the poor and elderly, and benefits for federal retirees and veterans [source: Center on Budget and Policy Priorities].

Those costs are only going to rise over the next 25 years as more and more baby boomers start collecting Social Security and drawing heavily from Medicare. So while it's interesting to ask whether taxes are socialist, the more pressing question might be, how are we going to continue to fund these proudly "American" social programs without raising taxes and/or drastically cutting spending in other areas?

For lots more information on taxes, politics and economic turmoil (oh my!), explore the related links on the next page.