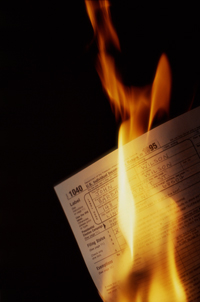 Tax Image Gallery While it's tempting, you really shouldn't burn your tax forms before you send them in. See more tax pictures.
Michael Malyszko/Taxi/Getty Images

The American tax system is a huge machine with a tax code that seems more complex than rocket science. Many of us have come to dread April 15th because of its connection to the Internal Revenue Service (IRS). In fact, taxes have always left a sour taste in the mouths of American citizens. This national hatred for taxes dates back to the tax burden placed on the American colonies by Great Britain. Colonists were taxed for every consumer good, from tea and tobacco to legal documents. This "taxation without representation" led to many revolts.

While a revolt isn't imminent today, many of us have imagined a more personal revolt. Have you ever wondered what exactly would happen if you failed to file and pay your taxes one year?

Although most Americans tend to think about the tax system and the IRS only as the month of April approaches, the tax process is actually never ending. By law, employers are required to withhold employment taxes from their employees' earnings. People who are self-employed are still responsible for withholding taxes from their own wages.

­­In fact, the income tax process begins when a person starts a new job. The employee and employer agree on compensation, which will be figured into the gross income at the end of the year. One of the first things an employee has to do when hired is fill out all of the tax forms, including a W-4 form. The W-4 form lists all of the employees withholding allowance information, such as the number of dependents and childcare expenses. The information on this form tells an employer just how much money it needs to withhold from a persons paycheck for federal income tax. The IRS suggests that you check this form each year, as your tax situation may change from year to year.

As the employer collects the withheld money, it deposits the money into an approved financial institution. A report is filed on a quarterly basis to notify the IRS of how much money has been withheld from each employee's salary. Another reporting is filed at the end of the year as well.

Punishment For Not Paying Taxes 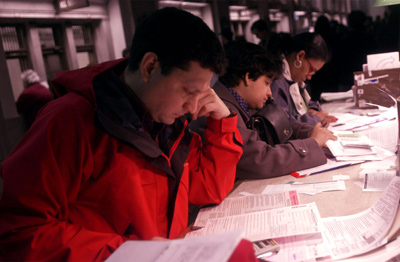 Filing your taxes at the last minute -- or even late -- is better than not filing at all. These tax payers filed at the very last minute in Manhattan in 2000.
Chris Hondros/Staff/Getty Images

Now, let's say you decide not to file this year. As with any other agency that's owed money, the government wouldn't be pleased at all. Initially, it would send you a letter notifying you of your forgetfulness. If you failed to respond, you would receive more letters. Eventually the government would send a final letter, but this time it would include a bill. It turns out that the government has a right to determine what your income would be based on past records. This is known as a Substitute for Return or SFR.

Let's say you were in a higher tax bracket during your last filing, but since then, you were laid off and had to take a considerable pay cut to find work. If the government bases its assessment on your previous employment, your bill would be much higher than it otherwise should be. Even if, for example, your job remained the same with similar earnings, most SFRs include only the standard deductions. Any other deductions that you may be entitled to claim will not be included. Furthermore, there are penalties and fines associated with failure to file and failure to pay charges. These penalties can be as much as 50 percent to 75 percent of the original amount owed.

Once the government has sent you a bill, you have two options:

If you continue to pursue your personal revolt against taxation, it could cost you even more. The government has the right to recoup its money as it sees fit. It can:

Simply put, failure to file, failure to pay and tax evasion can result in any number of civil and even criminal punishments, including imprisonment.