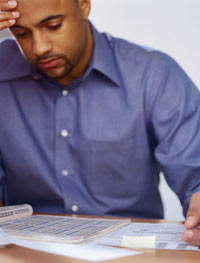 The first step is calculate exactly how much capital gain you've earned in the last year (yes, you must pay capital gains tax every year). This sounds easy enough. All you have to do is take the sale price of a capital asset (stock, real estate, etc.) and subtract the original purchase price. But it gets a little trickier if you're not the person who originally purchased the asset or investment.

The original purchase price of an investment (like stock, other securities or investment property) is known as the cost basis. There are several different ways to calculate this:

Once you've figured out how much you've earned from the sale of each asset, you need to figure out how long you've owned each asset. This is called the holding period of an investment and is divided into three categories, each with a different tax rate:

There are some exceptions for long-term capital gains rates. The long-term rate for collectibles is currently a flat 28 percent across all tax brackets. That's the same for small business stock held for more than five years. For real estate investments, the long-term capital gains tax is either 5 percent or 15 percent depending on income level as long as you held the asset for at least one year [source: Kennon].

Now let's look at a few of the most effective ways to lower your capital gains tax burden.