How the Online Trading Academy Works 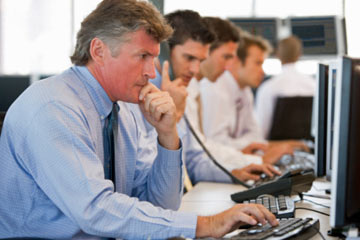 The Online Trading Academy's vice president of marketing says that it has had male and female students of all ages, but fully 70 percent are men and the average age is 60.
Hemera/Thinkstock

Before he came across the Online Trading Academy, Gordon Peldo had never done any trading. "I was an investor. I had a 401(k) and stocks," he says. "I was with Gulf Oil Corporation and bought their corporate stock." But Peldo, who lives less than 10 miles from Online Trading Academy's corporate headquarters, decided that he wanted to start trading in 2006. "Because of the action," he says.

But Peldo, who is now retired, knew he wanted to educate himself as much as possible before he actually started putting his hard-earned money at risk [source: Peldo]. He came across the Online Trading Academy on the Internet, went to a presentation and signed up on the spot. Five years later, it's a decision he doesn't regret. "I'm making money," says Peldo, who is a day trader. "I show a net profit month after month."

In many respects, Peldo is a fairly typical Online Trading Academy student. Although Harkey, the company's vice president of marketing, says that it has had male and female students of all ages, fully 70 percent are men and the average age is 60 [source: Harkey]. "A lot of students discover us because they retire and have life savings and time to think about how to make their money work better for them," he says.

Like Peldo, many Online Trading Academy students have little or no experience with trading. Even if they do, they want to do it better and more profitably. At least that is the notion that drives the company's advertising. "I target people who are actively consuming information to improve their investing or trading performance," says Harkey. These sorts of people, he says, can be reached by advertising on CNBC, Bloomberg Radio, stock picking services, newsletters and other venues offering information about better trading and investing.

Those who, like Peldo, attend a workshop sponsored by the Online Trading Academy and subsequently sign up for courses typically take a seven-day Professional Trader Course first. Other classes offered run the gamut, including ones on trading futures, options, commodities and many others. The academy also offers what it calls the Extended Learning Track, which gives students the opportunity to participate in live online tutorials with instructors and other students where they explore market trends and try to identify trading opportunities [source: Harkey].

Regardless of the classes taken, students do not earn any sort of degree or certificate that has any use in finding a job; it's all about managing one's own money more effectively. And the courses aren't cheap: They average about $1,000 per day, although students are allowed to retake courses as many times as they'd like for the rest of their lives at no additional cost.

Read on to learn about the teachers and their approach.