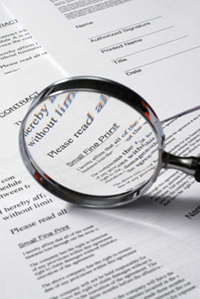 As painstaking as it is, reading the fine print will help you to avoid costly mistakes.
David Gould/Getty Images

Who doesn't want to believe that their debts will disappear after they complete three easy steps? People who are concerned and confused about their debt situation pose exceptionally tempting prey to scammers. Many cons are as simple as companies asking for payment up front and not delivering on the loan. By the way, U.S. and Canadian companies legally cannot call you and promise you a loan then ask for an advance fee before the transaction is completed [source: Federal Trade Commission (FTC)].

Another trick is to claim non-profit status. The FTC has exposed several so-called non-profits, such as the National Consumer Council and Debt Management Foundation Services, which were funneling funds to a for-profit company. Given their deceptive names, it's not surprising that unsuspecting people were willing to trust them.

The victims of these scams fell deeper in debt and suffered a rise in interest rates, as well as other penalties and damage to their credit. Some people even went bankrupt after being misled by these fraudulent companies. In addition, by hiding behind supposed non-profit status, these organizations called numbers on the National Do Not Call Registry to advertise their services. The FTC charged them with not only lying about what their services would do, but also failing to disclose the penalties and fees that would result.

Now that you're looking over your shoulder, why don't you take the following precautionary steps recommended by the FTC before taking out a loan with a finance company:

Although they aren't exactly scamming you, many finance companies simply don't warn you about the excessive fees they charge. These fees can add up so that you pile on even more debt. In a related article on debt settlement, SmartMoney writer Aleksandra Todorova named a few fees to watch out for:

The FTC also cautions against companies that pressure you to pay "voluntary fees." One company that the FTC exposed, called AmeriDebt Inc. collected about $200 million in hidden costs like these [source: Federal Trade Commission].

Just as diet pills are usually too good to be true, so are most debt consolidation offers. Remember, no new loan is going to free you instantly from your debts. But like losing weight, you can climb out of debt with good old-fashioned discipline. Inspired? Check out the next page to find a Web site that will help you to create your own budget and to read more on related topics.