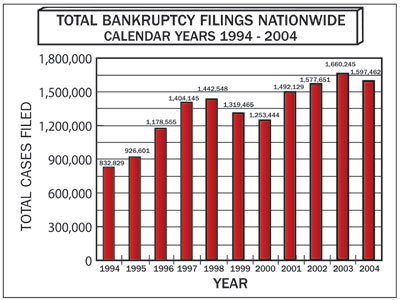 Although bankruptcy is complicated and the exact steps can vary from state to state, each chapter of bankruptcy uses the same terminology and follows the same basic process.

Two main parties are involved in bankruptcy filings -- the debtor and the creditor. The debtor is the party who has debt, or owes money, to the creditor. A debtor can be a company or an individual. The creditor is an organization or company that claims the debtor owes property, service, or money. Most bankruptcy cases involve several creditors.

Debtors can have two different types of debt -- secured and unsecured. With secured debts, creditors have the legal right to something of yours if you fail to make the proper payments. Your mortgage, for example, is a secured debt. By loaning you the money to pay for your house, the bank gets a lien on it. If you stop making mortgage payments, the bank can foreclose and take possession of your house.

In business, secured debt can get very complicated. Various business loans may give creditors a lien against intangible aspects of the business, such as patents, trademarks or intellectual property. The creditor can still repossess property that has a lien against it, even if some portion of the debt has been discharged -- secured debt can't ever be fully discharged. The debtor can either make the payments and keep the item, or stop paying on the debt and have the item repossessed. Secured creditors are always paid first in a bankruptcy settlement.

The four types of bankruptcy are named for their respective chapters in the United States Bankruptcy Code. The type of bankruptcy that you file depends on several factors, including whether or not you are an individual or part of a corporation.

Chapter 7 is what most people mean when they say, "I'm filing for bankruptcy." This is a liquidation bankruptcy, which means that the trustee sells off all non-exempt assets held by the debtor so that the debts can be repaid to the fullest extent possible. Individuals, corporations and partnerships are all eligible for Chapter 7 bankruptcies. The portion of the debt that can't be repaid through liquidation is discharged. Businesses generally try to avoid Chapter 7, because it is impossible to conduct business operations. Income generated after the bankruptcy filing is not a part of the bankruptcy -- the debtor can keep it.

Chapter 11 is the most complex bankruptcy filing and the one that most troubled businesses file (although some individuals may file it as well). In a Chapter 11 bankruptcy filing, the debtor continues to function, maintains ownership of all assets, and tries to work out a reorganization plan to pay off creditors.

In the past, a business had an almost unlimited amount of time to come up with their reorganization and payment plan. The Bankruptcy Abuse Prevention and Consumer Protection Act of 2005 imposes a 120-day time limit. If the debtor has not submitted a plan within that period, creditors can submit their own plans.

Chapter 12 is specifically for farm owners. The debtor still owns and controls his assets and works out a repayment plan with the creditors. Chapter 13 is like Chapter 11, but for individuals. The debtor retains control and ownership of assets. He also works out a three to five-year repayment plan. Some portion of the debt may be discharged, depending on the income of the debtor. There are also limits on the amount of debt involved.

Lastly, here are a few key bankruptcy terms you'll want to familiarize yourself with: