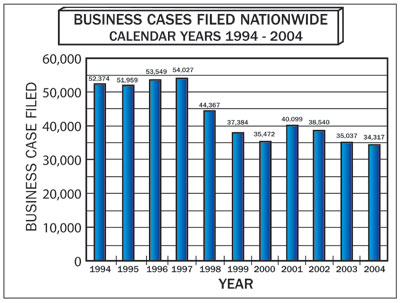 Although some large companies have filed for bankruptcy in recent years, the overall number of corporate bankruptcies has declined.
HowStuffWorks

Companies choose to file Chapter 11 because its long-term revenues will be higher than the liquidation value of the assets. This way, creditors can get more money back if they allow the debtor business to reorganize and work out a payment plan. The business becomes a debtor in possession, maintaining control and ownership of their assets and continuing their regular operations. At this point, there is usually no trustee.

A company that declares Chapter 11 must disclose all of its assets and make a list of all the debts that it is seeking protection from. This is the creditors' right to question the debtor, a fundamental part of bankruptcy law. In cases involving millions or billions of dollars, this step alone can be incredibly complex. The creditors also meet with the debtor.

If the bankruptcy court finds that there has been fraud or gross mismanagement on the part of the debtor, they can appoint a trustee, who will take over the operations of the debtor for the duration of the proceeding. The business continues to operate as normal, but the original owner is no longer in control. The trustee appointed to a specific bankruptcy may be different from the "U.S. Trustee." While federal bankruptcy courts are in charge of the proceedings, the Department of Justice also assigns a U.S. Trustee to each district. The U.S. Trustee serves as a watchdog over bankruptcy cases and may act as the trustee in a proceeding.

While under Chapter 11, a company can only make the usual sales and purchases that are part of its standard business operations. For example, it can't buy out another company, sell off a division of the company, or sell a major piece of equipment or property without approval from the court. It can't undergo a major expansion, either.

In all Chapter 11 proceedings, a creditors' committee represents the majority of the unsecured creditors, and negotiates the best possible payment options for them. Large-scale cases may have multiple creditors' committees, each representing different groups and factions of the creditors. Stockholders can also form a committee.

At this point, the debtor formulates a plan to reorganize its debts. This plan can be a simple as a payment plan. With larger bankruptcies, companies may take many steps to reorganize their debt. They might offer stock to some creditors. A retail business might have to close stores, lay off employees, or renegotiate union contracts. One of the major provisions of Chapter 11 allows a company to void many of its contracts, including union contracts, contracts with suppliers, and real estate leases.

The debtor can also "avoid" certain payments or purchases that happened in the period prior to the bankruptcy. The usual period is 90 days, but payments or gifts made to friends, family or company insiders have a one-year limit (or longer, depending on the state where the bankruptcy is filed). Some payments can be returned to the debtor and become subject to the terms of the reorganization plan. This keeps debtors from manipulating their assets and giving preference to certain creditors.

It is important to note that during the period of reorganization, the company's stocks will be virtually worthless. If the company gets out of Chapter 11 and begins operating normally, those stocks can increase in value, but at first they will probably be worth much less than the initial purchase price. Bondholders can sometimes get a fraction of the bonds' face value as part of the reorganization.

If a debtor violates the terms of the plan, there are several potential consequences. A trustee may be appointed. If it appears that the company will not be able to operate profitably and follow through with repayment plans, the Chapter 11 will be converted into Chapter 7. This is a death sentence for the company.

No one ever goes to jail for being in debt. This is easy to overlook when many high profile corporate bankruptcies follow financial crimes committed by executives or accountants. Financial fraud can lead a company to bankruptcy, and the executives may be prosecuted, but bankruptcy itself is not a crime.

In addition to the federal bankruptcy laws, each state has its own provisions for handling bankruptcies within that state. For the most part, the differences have to do with income and debt limits that debtors must meet to be eligible for filing under each chapter. There are also differences in the time limits given for reorganization plans, income subject to liquidation, exempt assets and other details. In the past, these differences led debtors (particularly corporations) to "shop around" for the state with the best possible terms. The Bankruptcy Abuse Prevention and Consumer Protection Act of 2005 requires anyone filing for bankruptcy in a state to have lived in that state for two years prior to the filing.