Browse the article How Student Loan Deferments and Forbearance Work 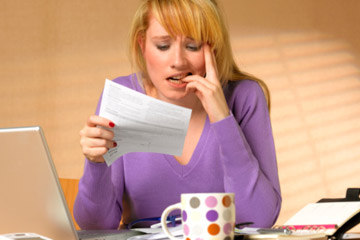 If your financial situation isn't making it easy to pay off your loans, you might qualify for a deferment or forbearance. See more college pictures.
Peter Dazeley/Photographer's Choice/Getty Images

Picture this: It's college graduation day. You have your cap and gown, your diploma and congratulations from friends and family. You have hopes and plans for the future. And, if you're like 52 percent of full-time college students, you also have student loan debt. The average full-time student loan for the school year 2007-2008 was $7,100; by graduation, the total amount you owe could be in the tens of thousands [source: National Center for Educational Statistics].

You haven't even started your new job and you're already in debt. What do you do? Sinking into despair is not constructive; neither is defaulting on loans, which can result in poor credit ratings or garnishment of wages. Bankruptcy is not an effective strategy, either: Most likely the loan will not be discharged [source: Federal Student Aid: Loan].

You could start paying off your loans, but if that's not financially feasible, you may have two options. Depending upon the types of loans, amount you owe and immediate plans, you may receive a deferment or forbearance from your lender. Deferments allow you to postpone payment on your loan for several months or even years. With forbearance, you may postpone payments or lower your monthly payment by extending the length of your loan. You may seek deferment or forbearance anytime during the repayment period, but you may not be eligible if you are in default.

Several variables determine which type of debt relief you're permitted, beginning with the type of loan you received: federal or private (also known as alternative). Federal loans include the following:

Private (alternative) loans are through banks and other lending institutions and function much the same as other consumer loans: the terms vary, often significantly, from lender to lender. Read more about private and federal loans in How Student Loans Work.

Sorting through student loan repayment may seem complicated, but it's actually easier than that organic chemistry class you passed in your junior year. We'll examine qualifications for attaining deferments or forbearance, the processes for application and reimbursement, and the pros and cons of participation. First up: How do you know whether you're eligible for a deferment or forbearance?

Qualifications for Deferments and Forbearance

Are you eligible for a postponement of your loan repayment? Many factors are involved, so let's break this information down into small chunks. First, we're going to investigate deferments for federal loans, since regulations are consistent for all borrowers. Remember, parents -- not students -- take out PLUS Loans for undergraduates. Therefore, it's the parents' ability to repay that is considered [source: StaffordLoan.com]. In order to receive a deferment for any federal loan, you must prove your status in one of five areas:

Next, let's delve into forbearance. Federal loan forbearance may be available if your lender determines you are not eligible for a deferment. This option may be less favorable, because regardless of your type of loan, you will be responsible for accrued interest [source: Federal Student Aid: Postponing]. Nevertheless, if you're finding it difficult to make payments, you may fit into one of the following eligibility categories:

There is some overlap between the categories for deferment and forbearance, so which you receive depends a great deal on your lender's view of your repayment abilities, the severity of your problem and your personal responsibilities (such as number of dependents).

If you have a private (alternative) loan, you might be able to get a deferment or forbearance similar to those offered for federal loans. Alternatives and requirements differ among lenders; check with yours to determine your chances.

By now you might have an idea of whether you want to request a deferment or forbearance. Let's take a look at the application process next, starting with federal and private deferments.

In 2009, Congress was working on a plan -- the Student Aid and Fiscal Responsibility Act (SAFRA) -- so that federal loans would go directly to students without private financial institutions acting as intermediaries. The anticipated result would be more money available for scholarships and loans, although the private lender industry has argued that this would give the government too much control over student loans. As of early 2010, Congress still had not passed the bill [source: Duncan].

The first step: Fill out an application. You can find the official U. S. Department of Education forms online for both FFEL and Direct Loans [sources: USA Funds, Federal Student Aid: Deferment]. With any application, you're going to have to provide proof that supports your case, such as an official enrollment certification or documentation of public assistance. Each deferment type requires specific evidence that is delineated on the application.

There is no universal application form for requesting a Perkins loan deferment; you must contact your loan holder directly. If the holder is the Department of Education, you may use the sample request letter that appears on the department Web site [source: Federal Student Aid: Federal].

If you're still enrolled in school, you might be able to take advantage of a simpler method. Many colleges and financial institutions participate in the deferment component of the National Student Clearinghouse, a non-profit organization that verifies degree and enrollment information for more than 3,300 higher education institutions. If your lender participates, you only have to call the lender and request a deferment. The deferment is not inevitable, so remember to make any scheduled payments until you're sure it's been approved [source: National Student Clearinghouse].

How long will deferment last? That depends upon the reason for the postponement:

If you have any past-due payments, the delinquent part of your loan -- the part that hasn't been paid -- may not be eligible for deferment; it depends upon your lender. You may be able to forbear the outstanding share [sources: Federal Student Aid: Deferment].

During the deferment, if you have an unsubsidized loan, you will be responsible for the interest that continues to accrue. Some borrowers choose to pay just this interest, because any left unpaid is added to your balance due (capitalized) after the deferment. The deferment itself should not negatively affect your credit score, because you are not refusing to pay, and you've gone through the appropriate channels.

When applying for a private loan deferment, the procedures, timelines and limits will depend upon your lender.

If deferment is not right for you, you might be entitled to forbearance. Let's explore that application process next.

What Type of Federal Loan Do You Have?

Sometimes, after receiving multiple loans over multiple years and moving multiple times, students lose track of their loans. What kind do you have? For what amount? When did you receive it? This information is available online from the National Student Loan Data System, a U. S. Department of Education repository for all personal federal loan information [source: Federal Student Aid: National].

If you need to postpone payment of a loan but do not qualify for deferment, then forbearance might meet your needs. The procedure for obtaining federal loan forbearance is much like that for deferment. Step one: You must apply. Again, just like a deferment, nothing is automatic, not even a continuation of forbearance. Keep making those payments until you've received notification from your lender that the status has been approved.

If you have a Direct Loan, access an application online from the U. S. Department of Education [source: Federal Student Aid: Forbearance]; for FFEL or Perkins Loans, you'll have to contact your lender. Many of these forms may be available on lenders' Web sites.

How long will forbearance last? Like deferment, that depends upon the reason, and, if you need an extension, you must re-apply:

Unlike some deferments, you definitely will be responsible for interest that accrues during forbearance, and you might want to consider paying the interest instead of letting it accumulate. Any unpaid interest is added to the principal, increasing the total amount you will owe. In any case, your credit rating should not be negatively impacted, because it's just a postponement, not a default on payments [source: Federal Student Aid: Did You Know]. If you do stop paying your loan, however, your chance of acquiring forbearance plummets [source: Federal Student Aid: Default].

By now, you can probably anticipate the recommended procedure for obtaining forbearance on a private loan. All together now: It depends upon your lender.

The U. S. Department of Education provides information on alternatives to forbearance. For instance, there are other methods of reducing monthly payments, or you may adjust the date on which your payment is due. If it doesn't coincide with your other bills' due dates, repayment might be more manageable [source: Federal Student Aid: Did You Know].

You now have a tremendous amount of information: How do you determine what to do? To facilitate the decision-making process, let's look at the pros and cons of deferments and forbearance.

Pros and Cons of Deferments and Forbearance

There's a tremendous amount of information available concerning student loan repayment, but it still comes down to four choices: start paying now, don't pay at all, reduce monthly payments or postpone them. How do you choose which is right for you?

You need to contemplate your personal situation. There are several circumstances in which deferment or forbearance could benefit you.

Are you capable of making the loan repayments as scheduled? You could consolidate multiple loans, which might lower your payments enough to make them manageable. If career and lodging plans aren't shaping up, or you don't have an abundance of available funds as you transition from college to the world outside academia, then deferment or forbearance can ease a less-than-optimum process.

Also, if you are in a temporary setback -- whether form sudden health issues, a downturn in the economy, getting laid off or something else -- these kinds of things can negatively impact you in the short term. They may even arise long after graduation but within the loan repayment period. If you find yourself in this situation, getting a break on student loan payment might alleviate stress to some degree.

If you're considering loan default as an option, know that it could affect your credit rating, impact your salary (wage garnishment), encroach on your tax refund and result in penalties. Deferment or forbearance could prevent such things from happening.

On the other hand, there are disadvantages to deferments and forbearance; you have to weigh these consequences as well:

Deciding the best way to pay off your student loans is not easy, but you have facts to aid you in making an informed decision. Still looking for more input? Read on for links to lots more information about deferment, forbearance and student loans.

As of Oct. 1, 2007, if you join the public service sector, the federal government may forgive some of your student loan debt. There are strict rules: This applies only to Direct Loans, and you must be working for a public service organization while making 120 monthly payments on your loan. Public service, however, is broadly defined, including any federal, state or local government organizations (such as schools, law enforcement agencies and public health services), non-profit charities, AmeriCorps and the Peace Corps [source: Federal Student Aid: Public].

Teachers working full-time in low-income areas for five years may have up to $17,500 of their Stafford Loans dismissed; this applies to both FFEL and Direct Loans [source: Federal Student Aid: Stafford].