How much should you save in a college fund? 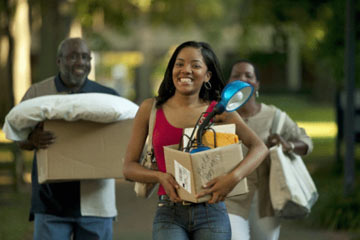 Saving for college is hard, but it can be done. And experts say the sooner you start, the better.
Comstock Images/Getty Images

Mino Caulton and his parents of Shutesbury, Ma., were more than ecstatic when Juniata College gave the 18-year-old $18,500 in grants to pay for school. It was quite an achievement for Mino, who has dyslexia. Despite the good news, Mino had to rethink his options. Although 18-and-half-grand is a nice chunk of change for a small college to give a student, Mino and his parents would still be forced to borrow thousands more to pay for his education [source: Lieber].

It was a rude awakening for the Caultons, whose household income dropped 80 percent during the Great Recession. That left little money in Mino's college fund. Borrowing the additional cash was an option, but the family could ill afford any more debt. With his college prospects dimming, Mino was thinking hard about going to a cheaper community college [source: Lieber].

Saving for college has always been vexing, and the current economic squeeze hasn't made it any easier. According to the College Board, the average four-year, public-college tuition in 2011 was $16,140 a year for tuition, room and board and fees, up 6.1 percent. Those who want to go to a four-year, private college can expect to pay $36,993 annually [source: Market Watch].

Still, that's chump change considering that in 15 years the cost of a four-year public-college education could top more than $100,000, while a private school could skyrocket to $200,000 [source: Market Watch].

What are parents and students to do? Saving for college is hard, but it can be done. Experts say the sooner people start squirreling money away, the better. Even saving $100 a month for 18 years can yield a significant sum by the time college rolls around. Still, don't think for a moment that you have to save the entire cost. Grants, loans and scholarships can cover some of the expense. And please, experts say, don't sacrifice your retirement to pay for your child's education.

Like everything else, saving for college is easier said than done. Yet, people do it. Go to the next page and find out how.

Ever wonder why parents are so, well, pushy about how their children are doing in college? Ever wonder why the first and last words out of a parent's mouth before their child leaves for school are "study hard"? Parents are pushy because they love their children. They're also pushy because those children are an investment. Did you know that 37 percent of the average cost of paying for college comes out of mom and dad's savings accounts and paychecks, while an additional 10 percent comes from loans in their names? [source: Rampell].

Many parents begin socking away college money even before their little tykes are born. And it's not an easy row to hoe. In 2010, Fidelity Investments estimated the amount of money new parents would need to save each month for 18 years in a 529 college savings account (more on that next). Assuming that cost of college would rise 5.4 percent annually during that period, Fidelity concluded the following:

Fidelity based its calculations, not only on annual household income, but on an assumption that a family doesn't want to take out any loans. Fidelity then estimated how much in gifts, grants and scholarships a student would receive based on their household incomes. Fidelity subtracted that amount from the expected cost of college [source: Schultz].

However, the guidelines do not take into account costs such as health care and transportation, two expenses not covered by 529 plans. Parents can expect to pay upward of $2,500 more a year to cover such costs, the company said [source: Schultz].

Despite these eye-popping costs, experts say the best way to pay for college is to have a plan and stick with it. And thanks to the government, saving for college has never been easier. There are many ways to save, including the following:

Kids, don't think that you're off the hook because your parents have access to these and other programs. The average student borrows 14 percent to cover the cost of college, while only using 9 percent of their savings and income [source: Rampell]. To help mom and dad, students can apply for loans, grants and scholarships. Oh, yeah, you can also get job or two.

Welcome to your first class: Introduction to the real world!

A 2011 survey by the College Savings Foundation found that 65 percent of parents are saving for their children's college education [source: Market Watch].