How do store coupons work? 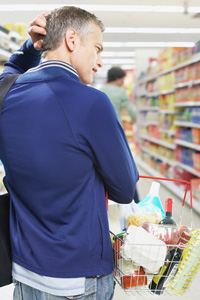 What happens to that little scrap of paper when you redeem it?
Paul Bradbury/OJO Images/Getty Images

If you have ever used coupons at the grocery store, then you know the routine. You cut coupons out of newspapers and magazines, take them to the store and use them to get discounts on certain products. A coupon is the same as cash. For example, if you have a $1.00 off coupon on a box of cereal, the cashier takes the coupon as though it were cash. It's not that common any more, but some stores will even double a coupon's face value.

Once the cashier accepts the coupon, the store has a problem. It now has a small scrap of paper that is worth cash, but in order to get the cash the store has to mail the coupon to the manufacturer. On the back of most coupons in fine print, the manufacturer lists the mailing address and states that it will also reimburse the store some amount of money for processing -- typically 8 cents per coupon. Redeeming a coupon would not be that bad if there were only a few of them, but major grocery chains collect millions of them. At that scale it becomes a major headache! The whole process seems hopelessly antiquated, but coupons remain enormously popular and that is why they continue. A coupon is, essentially, free money, and free money is hard to stop...

If you use coupons, you know that when you reach the check out counter, you hand the cashier your coupon(s). The cashier scans them and puts them into the cash drawer. What happens next depends on the store, but here's a typical process. At the end of the day the coupons in each cash drawer are added up as if they were cash, and that amount is added to the cash sum to be sure the overall total for the drawer is accurate. Then all of the manufacturers' coupons (and any coupons issued by the grocer) are sent in plastic bags or pouches to the store's corporate headquarters, typically once a week.

In the big store chains, the value of the coupons can easily total several million dollars per week. There is a person in headquarters in charge of processing the coupons. That person boxes all of the bags of coupons (still separated by the individual stores from which they came) and ships them to a third-party clearinghouse.

This is where the real work starts. The clearinghouse has to sort through millions of coupons, largely by hand. The first goal is to separate the coupons by manufacturer. Another goal is to separate coupons with scannable UPC codes from damaged (torn, smudged, etc.) coupons. This is so much hand work that some clearinghouses pay other clearinghouses -- in Mexico, for example -- to do part of the work. One system places scannable coupons face up on a conveyor belt, where they are moved along under a scanner that reads the UPC codes and tallies the amounts, then adds up the total value of each manufacturers' coupons. Damaged coupons that can't be scanned have to be sorted by hand and added up separately. The other system is to do the whole thing by hand. The clearinghouse then sends all the sorted coupons with an invoice to the manufacturer.

This is another great example of how a simple idea -- "let's give people a little scrap of paper that they can redeem for 25 cents off a can of beans" -- turns into a whole lot of work for somebody!

How does bankruptcy affect your tax return?
Can the trustee sell your exempt assets in bankruptcy?
How Tax Evasion Works