5 Tips for Living Comfortably on a Budget 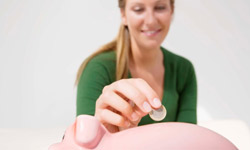 More people are feeling the pinch these days, but budgeting doesn't have to be a pain. See more banking pictures.
Jupiterimages/&copy;Getty Images/Thinkstock

Sadly, few people on this planet have access to immense stockpiles of gold bullion and vaults full of sparkly diamonds. Most of us have to live within our means and on a limited budget. This is especially true in these recession-ravaged times, in which the idea of luxury living looks less like brick mansions and more like rent-stabilized apartments.

Since the so-called Great Recession began in 2007, the ranks of people living below the poverty line in America have expanded substantially. In the southern part of the United States, around 17 percent are considered impoverished. In Washington D.C., more than 30 percent of children live in poverty [source: Reuters].

Even for those who've managed to avoid such destitution, the recession has strained family finances. Relatively wealthy families, especially, have become ardent users of coupons; 39 percent of households earning more than $70,000 per year have resorted to coupon clipping [source: Time].

Quite simply, many people have started learning to live on a budget. Having a budget equals thinking about money in an analytical, logical way to avoid excessive debt. It also means setting realistic goals for spending and saving. In doing so, you can prevent the recurring, hair-graying stress of getting behind on bills while actually getting more fun and enjoyment out of the money you spend.

Before we launch into our tips, it may help to clarify exactly what it means to live comfortably on budget. There's no black-and-white answer to that question.

For some people, putting away enough money to go on an annual three-day vacation might be the ultimate luxury. For others, going out to eat once a week or getting a monthly pedicure might be a real treat. Whatever you enjoy in life, there's a difference between living on a fun-starved budget and living comfortably -- yet still affordably.

Perhaps, the only thing stopping you from enjoying life a lot more is developing a better understanding of how to get the most from your money without having to sweat important bills.

So if you're one of the vast majority of Earth's citizens who must carefully plot out purchases both minor and major, keep reading. You'll see some tips that may help you save more money and have more fun at the same time.