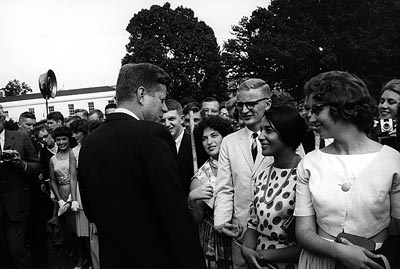 President John F. Kennedy is considered the father of the Peace Corps. In 1960, while campaigning for the presidency, then Senator Kennedy made a late-night speech at the University of Michigan. He outlined his proposal for a civilian service corps in which college graduates would devote two years of their lives to aiding developing countries. After being elected, President Kennedy brought the Peace Corps into existence with an executive order on March 1, 1961. Congress later made it official by authorizing the new organization's budget.

President Richard Nixon placed the Peace Corps within a larger federal department, but in 1979, President Jimmy Carter made the Corps a fully independent and autonomous organization [Source: The Peace Corps].