The Good and the Bad of the Peace Corps 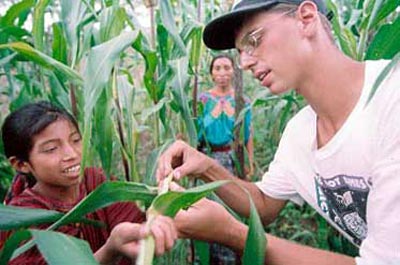 Volunteers will teach children the importance of the environment.
Photo courtesy of the Peace Corps

While the Peace Corps' budget is a pittance compared to the rest of the federal budget, anything that costs more than $300 million each year is open to the question, "Is it worth the money?" Or more precisely, does the Peace Corps accomplish what it's supposed to accomplish? It's virtually impossible to answer that question because so much of what the Corps does accomplish is intangible. Do people in developing countries look more fondly upon Americans than they once did? Are the lives of people in those countries improved by their contact with the Corps? Are the Americans who volunteer better people because of it? These things are impossible to measure.

Many volunteers report that their initial idealistic goals (often broad "make the world a better place" type goals) are quickly replaced by more pragmatic aims, like making their town a better place, getting a group of children to understand the importance of the environment or teaching a few farmers how to make their land sustainable. Measuring one or two lives at a time, it's certain that the Peace Corps has helped many people. Whether they're "making the world a better place" will always be open to debate.

Almost all volunteers feel that they have bettered themselves with their Peace Corps experience. The technical training, opportunity to travel to an exotic place, experience with different cultures and ability to deal with hardships stays with volunteers for decades.

Overall, the Peace Corps and its volunteers enjoy a positive reputation in the United States and internationally. However, it is not immune to criticism.

In the United States, critics sometimes characterize volunteers as aimless, liberal youth taking an extended trip abroad at tax-payer expense. However, volunteers' political leanings cover a wide spectrum, and there are many older volunteers.

Host countries sometimes view the Peace Corps with suspicion, particularly when the Corps first introduces a program to that country. There are fears that the volunteers are CIA spies or are plotting to undermine the economy or government for the United States' benefit. Volunteers have found that the more contact people have with the Corps and the volunteers, the more quickly such suspicion dissipates.

Another criticism of the Peace Corps is vulnerability of volunteers to crime. Serving in isolated areas in cultures with different values and attitudes, combined with extreme poverty in some cases, has lead to many cases of robbery and some assaults. A 2002 report by the General Accounting Office found that the rate of crimes against volunteers was steadily increasing, and that the problem might be even worse due to underreporting. The report blamed poor reporting practices and a high turnover rate in Peace Corps administration and training (a rate actually enforced by Corps policy) for a lack of preparedness for host country crime [Source: United States General Accounting Office].

Peace Corps volunteers have been murdered, though it's rare. Deborah Gardner was stabbed to death by another volunteer in Tonga in 1976 -- a series of strange legal quirks allowed the murderer, Dennis Priven, to go free [Source: New York Magazine]. In 1966, a volunteer was accused of beating his wife to death in Tanzania, but he was acquitted [Source: Peace Corps Writers]. More recently, in 2007, 40-year-old volunteer Julie Campbell was murdered in the Phillippines, possibly by a local carpenter [Source: The Honolulu Advertiser].

Many Peace Corps volunteers have gone on to success in their post-Corps lives. Several current and former members of Congress (both Democrat and Republican) were volunteers, including representatives Sam Farr and Christopher Shays and Senator Christopher Dodd. Reed Hastings, founder of Netflix, Priscilla Wrubel, founder of the Nature Company and Pamela W. Barnes, president of the Elizabeth Glaser Pediatric AIDS Foundation were former volunteers as well. Evangeline Lilly, of LOST fame, also served as a volunteer before turning to modeling and acting.