What is BigLaw, and why is it in danger? 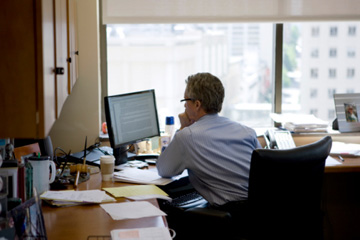 BigLaw. One word. It's become a familiar term in headlines -- often unflattering ones. You'll find it on blogs about the legal profession. You'll see it in news coverage. Sometimes more formal news media, such as "The New York Times" and "The Wall Street Journal," will be more traditional and use "Big Law" as two words.

One word or two, the meaning has become clear. BigLaw is the collective nickname for the world's biggest and most successful law firms. These are the firms with upwards of 1,000 partners. They usually have headquarters in big cities -- New York, Los Angeles, Dallas, Chicago, Boston and the like. Many have a major presence in Washington, D.C. They're also likely to have offices in Europe, Asia and other continents.

BigLaw's fees are big, too. Some charge their clients upwards of $1,000 an hour -- even more for handling specialized problems [source: Koppel].

And a job in a BigLaw firm can mean big money for a lawyer. Partners at top BigLaw firms may pull down as much as $5 million a year. For partners who perform well -- by being in demand and bringing in lots of money for the firm -- there may be a bonus of $1 million or more on top of the regular compensation.

If that wasn't enough, the big bucks trickle down to the lowliest associates (junior employees who are trying to become partners). Newly hired associates at some BigLaw firms -- often the best and brightest from the top 10 U.S. law schools -- are paid as much as $160,000 or more fresh out of law school [source: Segal].

Not everyone who goes to law school hopes for a BigLaw job. Many aspire to jobs in government or public interest groups. Some want to practice in smaller firms and smaller cities. Some want to go into practice for themselves or follow other paths beyond the law.

But a significant number of aspiring lawyers vie for admission to top-tier, expensive law schools with lucrative BigLaw incomes in mind.

And quite a few of them are finding that BigLaw is in trouble, and that means they may be, too.

Keep reading to learn why BigLaw has run into trouble.

BigLaw firms were booming in the years leading up to the recession that started in 2008. In the early years of the 21st century, many of them expanded.

When the economic bubble burst, it burst for BigLaw firms too. Some of the first to get into trouble had worked with the mortgage industry, which had run aground by 2007. A prominent example is Thacher Proffitt & Wood, a New York City law firm. Early in 2008, revenues dropped sharply, but debt was still there. Profits were down, and so were paychecks for equity partners. Bonuses were a thing of the past. Partners began bailing out. By December 2008, the 160-year-old firm had dissolved. [source: Orey]

Some BigLaw firms stayed afloat partly by cutting staff. Partners were encouraged to retire. Associates were laid off or asked to take leaves of absence. When the recession lasted longer than expected, more BigLaw firms began to feel the pinch.

Howrey LLP, a BigLaw firm based in Washington, had continued to expand while others were running into trouble. But early in 2011, mainstream media and legal blogs began speculating about Howrey's possible collapse. Its top partners were leaving in droves and taking jobs at other firms [source: Becker]. This makes sense: In recent years, top clients have begun to be loyal to top lawyers rather than to firms. Lateral moves from one firm to another have become more common.

News reports blamed Howrey's problems on expanding too rapidly and into the wrong fields, including construction law. Revenues and paychecks dropped sharply. By the end of 2010, many of Howrey's top partners were finding other jobs. 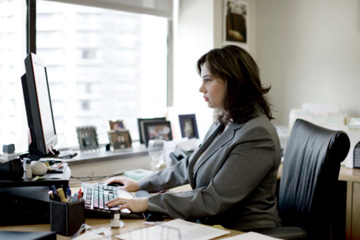 Most law students dream of getting a job in BigLaw, but the recession has whittled away most of the perks associated with these positions.
Tim Klein/Getty Images

It's never been easy to get a BigLaw job. If you don't graduate toward the top of your class in one of the nation's 15 or 20 most prestigious law schools, you probably don't have a chance. As people with visions of BigLaw jobs competed for spots at those top law schools, tuition costs soared, reaching nearly $50,000 a year for some. As tuition costs went up, even students at the top schools who might have been more interested in public-sector jobs considered BigLaw so that they could pay off their student loans. Competition got even stiffer.

When the recession caused problems for many BigLaw firms, hiring of new associates slowed. Since 2008, BigLaw firms have shed an estimated 15,000 jobs [source: Segal]. These firms have found they can outsource some of the work that associates once did to contract workers in the U.S. and abroad.

Making matters worse, enrollment at law schools is up even as demand for new lawyers is down, partly because college graduates who don't have jobs think it's a good time to go back to school. In 2009, 43,000 new lawyers graduated, up 11 percent from the late 1990s [source: Segal].

Besides prestige, one of the big advantages of being at one of the nation's top law schools was recruiting. BigLaw would send representatives to campuses to woo top students. Some BigLaw firms staged summer "boot camps" to give law students a taste of their firm, and to put an early bid in for the best students. Much of this recruiting has been trimmed in light of the recession.

Firms simply didn't have the resources to hire all of those new recruits: A recent survey by the National Law Journal found that the nation's top law schools sent 10 percent fewer graduates to BigLaw firms in 2010 as compared to 2009 [source: Jones]. And in 2009, there were half as many openings for associates at BigLaw firms as the year before [source: Shih]. Students who received offers would increasingly have their offers deferred or even rescinded. Even worse, some younger associates wound up getting laid off for financial reasons.

Leaders in legal organizations and at law schools and firms have begun to talk about changing recruitment. There are still some good associate jobs at BigLaw firms, but they tend to be for lawyers who can immediately be productive in specialized areas rather than just those who had good grades at top schools. And the practice of recruiting associates a year or two before they graduate causes problems when there are sudden changes in the economy and fewer lawyers are needed.

Is a BigLaw job really a dream job? You might be surprised. Read on.

Is BigLaw the best possible job in the legal profession? Not necessarily.

It's easy to find blogs and YouTube videos filled with complaints from law students and recent law graduates. The number of law schools in the U.S. has been on the rise, and so has the number of law graduates. Only a few ever have a chance at the six-figure starting salaries in BigLaw, and that number has shrunk since the recession that started around 2008.

But the allure of big salaries has helped fuel the increase in tuition costs at law schools, to the point that even third- and fourth-tier schools often charge as much as $40,000 a year. New graduates often find it difficult to get any job as a lawyer, much less a job in BigLaw. Most have enormous student loans to pay off.

Even the fortunate few who land a BigLaw job with a big paycheck may be disappointed. Associates in many BigLaw firms find themselves pushed to work very long hours with few vacations. They often spend their time on tedious detailed work, poring over stacks of documents. They endure abuse from partners and senior associates. They rarely, if ever, appear in court. They know little about the drama of legal thrillers or movies. Often, they have no sense of helping clients or making a difference.

But some people prefer BigLaw jobs, working with complicated issues and being part of a huge team effort to presenting arguments in court. And working up to a position of power in one of the nation's top firms can bring many rewards, financial and otherwise.

A BigLaw job may not be every law student's dream. It certainly won't become every law student's reality. But the possibility of prestige and top salaries obviously still has plenty of appeal for many aspiring lawyers. Otherwise, we wouldn't see nearly so many headlines about what's gone wrong with BigLaw.

How do you get a job as a video games writer?
Not a Whale of a Tail: You Too Can Become a Mermaid
The Strong Bias Against Women in Coding