How do I get a job in the White House? 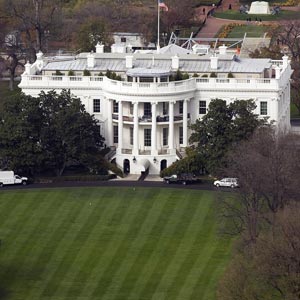 The White House isn't just a presidential mansion -- it's a base of operations for the executive branch of the U.S. government. See more pictures of Washington D.C.
Paul J. Richards/AFP/­Getty Images

­Americans have the chance to affect the course of the United States by voting in elections, but what if you want a more hands-on opportunity? How can you convince the government that you've got the skills, knowledge and drive to join the team in the White House?

That depends upon what you bring to the table, i­ncluding your ambitions. There are three different kinds of job opportunities you can pursue at the White House: non-career positions, internships and career positions. Non-career positions are temporary. Once a new administration enters the White House, your term in that position will end. It's possible that the new president will keep you on staff, but you shouldn't count on it. An internship is an unpaid position. Instead of getting paid, an intern's compensation includes on-the-job experience and networking opportunities. Career positions are competitive, non-political jobs. They're similar to jobs in other industries.

As of November 2008, the first step to landing a non-career position at the White House is to visit Barack Obama's change.gov Web site. When Obama became President-elect of the United States, his team of advisors launched the Web site to begin the process of choosing federal government appointees.

­Assuming you want one of these non-career positions, you'll need to submit an expression of interest. The change.gov Web site has a simple online form you can fill out. The required information includes your name, address, phone number, citizenship status and your most recent employer (or school, if you're a student). After submitting your information, it's time to wait. The Obama-Biden Transition Project, which oversees the applications, will contact you within a few days with further instructions.

When you receive the e-mail, you'll find a link to another Web site. This is where you'll get your first indication of what's in store for you. You'll have to fill out an online application that spans several online pages and asks for a lot of information. If you get through that phase, you'll have even more questions to answer -- some of these questions are of a very personal nature. In fact, some people consider the application process controversial and troublesome.

Let's take a closer look at non-career positions and what the Obama administration wants to know about you before bringing you into the fold. 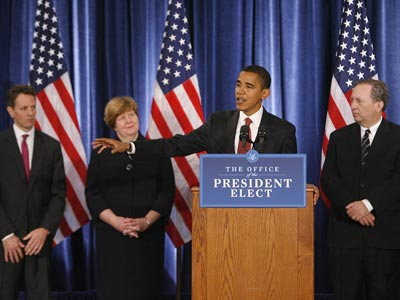 Congress determines how many PAS and NC-SES appointments the president can make. But the president decides how many PA and Schedule C positions will be in his or her administration. Positions in the PAS category include high-ranking cabinet roles and judiciary appointments. PA positions include the president's executive staff. NC-SES jobs are senior management positions -- typically with titles like deputy undersecretary or bureau director. And a person in a Schedule C job is responsible for determining policies and working with the key appointments in a confidential manner [source: Progressive Government].

According to the Progressive Government Web site, the White House can fill 6,478 appointed positions during a term. That sounds like a lot of jobs, but it's nothing compared to the number of applications. According to The New York Times, the Obama-Biden administration received more than 200,000 résumés within three weeks of launching the change.gov application site.

That brings us back to the application process. Here's a summary of the information you must include when submitting an application to change.gov:

There is another section in which applicants can submit optional information such as their gender, race and political party affiliation.

If you get beyond this first round, you'll have to answer more questions. Time Magazine reports that the seven-page personnel application includes 63 questions -- some of a very personal nature. That's because anyone holding a political position comes under intense scrutiny. The most intimate personal details sometimes take center stage -- things you considered private become topics of public discussion.

That's why the application asks tough perso­nal questions about your lifestyle and interactions with other people. It even grills you about your online activity. For example, it asks if you've ever sent e-mails or instant messages to other people that could become embarrassing to the administration if they were revealed to the public.

­One of the more controversial questions addresses gun ownership. The question asks if the applicant or an immediate family member owns a gun, if the gun is registered, if the registration ever lapsed and if the gun has caused personal injuries or property damage. Some gun advocacy groups claim that this question indicates the Obama administration is against personal gun ownership [source: Buckeye Firearms Association].

Even after passing the application, the journey isn't over. The applicant can expect the FBI to perform a full background check, including visits to friends, family, neighbors, schools and workplaces. And some positions then require the applicant to appear before the Senate for approval before getting the post.

­What if you don't want to go through this process, but still want to work at the White House? We'll look at internships and career jobs next.

Other things you have to disclose if you want to be considered: You must reveal information regarding any legal issues you may have had, including traffic violations. If you've worked for or with a financial institution that was affected by the 2008 government bailout, you have to reveal that data as well. 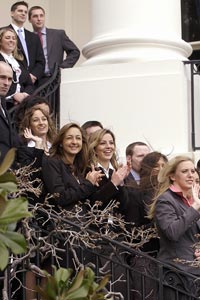 A group of White House interns gathers to wave goodbye to President George W. Bush as he departs on Marine One.
Mandel Ngan/AFP/­Getty Images

­The White House Internship Program gives people the opportunity to gain experience in a political environment and network with important people. All internships are unpaid and interns must provide for their own housing and transportation. But the benefits of working in an internship can potentially offset the lack of compensation. Depending upon the internship assignment, you might spend your days around powerful political figures as they guide national policy. On the other hand, you might end up sitting at a desk all day or filing paperwork.

Under the George W. Bush presidential administration, the White House would select 100 interns to work during the spring, summer and fall semesters. To become an intern, you had to meet the following criteria:

Applicants could indicate which offices they'd most like to work in but were not guaranteed a spot in those departments. They didn't have to interview with anyone -- the White House selected interns based solely upon the applicant's submissions. The internship program may or may not change under the Obama administration.

If you want to pursue a career at the White House that isn't a political appointment, you'll need to keep an eye out for job postings. You can find those at the Office of Personnel Management's USAJOBS Web site. You can expect a highly competitive job application process. These jobs include working for specific agencies and departments in non-managerial positions. Unlike management, these jobs tend to remain unaffected during changes of administration. You can work your way up the ranks and build experience. Who knows? It may even lead to an eventual non-career position with a future president!

One thing you should remember before you apply for any position within the government is that you'll be opening yourself up for a thorough background check. But if you've been on your best behavior, display a talent for leadership, have ambition and possess the drive to help the U.S. government lead the nation, you may land yourself a job at the most famous address in America.

To learn more about politics and related topics, take a look at the links on the next page.

Does any one industry have the happiest employees?
How do you get a job as a travel writer?
How to Deal with Difficult Co-workers