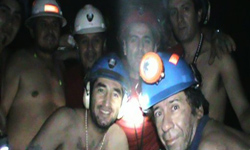 This television screenshot shows a group of miners trapped inside the San Jose mine in Copiapo, Chile in September 2010. The crew spent 70 days underground after the mine collapsed on Aug. 5.
Chile's Presidency/Getty Images

It isn't exactly news that unemployment is stressful. But working can be a great source of stress for many people. Polls and surveys have found that anywhere from one-fourth to nearly half of working Americans say that their job is extremely stressful [source: CareerCast].

Who has the most stressful job? Chances are that many people will say that they win that dubious honor, whatever their job may be. That's one of the problems with the lists that rank jobs by stress level: Polls and surveys may be unreliable. In addition, work-related stresses may not be caused by occupation, but a particular set of circumstances. If you don't like your boss or a co-worker, you're going to be stressed -- no matter what your job. The same is true if you know layoffs are coming, or if you're not suited to your job.

Another problem with comparisons is that some rankings don't group professions in the same way as others. Some don't even look at jobs that others rank as highly stressful. Various rankings list dentists, physicians, surgeons, and psychiatrists or therapists separately, while others lump them all into a "medical professional" category.

Keep reading. Maybe you have some ideas of your own.