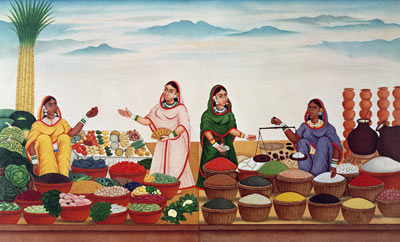 In the barter system, traders must decide on fair exchanges, which can be difficult. In this depiction, one woman holds a scale to compare weights.
Indian School/The Bridgeman Art Library/Getty Images

The barter system sustained early economies for millennia, and it probably predates recorded history. But, that doesn't mean it always works well. It has a lot of disadvantages that the invention of currency solved.

Sometimes bartering is just plain impractical because it takes a lot of time and work. Consider what life would be like in a barter economy. If you were a skilled artisan who made tables, then you'd barter tables for the things you need, like food. It's not a bad living, but what do you do when you want meat, and the herders don't use tables? You'd have to search for someone who is both in need of a table and has meat he's willing to sell. This takes a lot of time, and you're hungry now. You can always resort to orchestrating triangular or multilateral trade that we learned about earlier, but that also takes time. And, throughout the process, you're traveling from place to place and lugging heavy tables. This takes energy that you can be using more efficiently to make more tables. After all this hassle, you may be ready to quit the whole table business and instead fulfill your dreams of becoming a wine merchant.

Let's take another hypothetical situation: What happens when you want something small, like some tomatoes, and the tomato vendor asks you for a table in return? You'd probably argue that a table is worth a lot more than a few tomatoes. Unfortunately, the vendor can't do much with a single table leg, and you don't want hundreds of tomatoes that will spoil before you can eat them all. When you just have a few very valuable items, you'll have trouble making exchanges for several less valuable ones. Or, if you trade perishable goods, time becomes more of a factor -- you must trade them quickly or watch your assets rot into worthlessness. Because of this, you might be pressured into taking unfair deals.

Another problem barterers run into is deciding on an equal trade. You've probably heard the expression, "It's like comparing apples to oranges." But even apples and oranges, with all their differences, are both fruit of relatively equal size and shape. Can you imagine how difficult it would be to decide how many cows are worth how many pieces of wood?

When a society agrees on an acceptable form of currency, however, these problems either disappear or severely diminish. You no longer have to find people who have what you want and are willing to barter their stuff for what you're offering. Carrying coins is also easier than carrying tables. What's more, you can sell a table for 100 coins and then use one of those coins to buy a few tomatoes. With money, you don't have to compare apples and oranges. Even if you still have to negotiate how many coins an apple is worth, the matter is much simpler.

But money isn't always superior to bartering. Read on to find out why bartering is far from defunct.