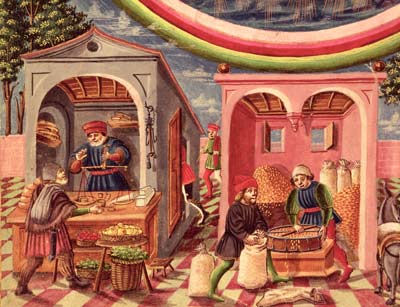 As we saw in the cookies and Twinkies example, the value of something is relative. It depends on a person's needs, wants and preferences. For example, someone living in Texas would probably value an air conditioner more than someone in Alaska would. Bartering can be a sweet deal when the Alaskan happens to own an air conditioner and the Texan owns a heater, and each would gladly exchange one for the other.

Timing is another important factor. Take Shakespeare's Richard III, who offers "my kingdom for a horse" in the heat of battle. That's why if you get a flat tire on a dark night, you'll offer a lot more than the market value for a spare.

Historically, bartering was especially useful after humans dropped their nomadic ways and settled down to farming and living in communities. A wheat farmer can't live on bread alone, but he can trade some of his surplus yield to a cattle rancher in exchange for some meat. Or, the farmer can sell wheat to a hungry worker who has the skills to build him a new plow. With the new plow, the farmer can grow even more wheat for the next harvest with, and he can trade for more stuff. In these exchanges, each gets something he considers more valuable than what he gives up.

The plot thickens when the farmer needs something in particular, such as an ox for pulling that plow, and the only person who has oxen to trade doesn't need wheat -- but is willing to trade for corn. At this point, the farmer tries to find a corn farmer who's willing to trade for wheat and then use that corn to trade for the ox. Trading between three parties is called triangular barter. It would be further complicated if the corn farmer doesn't like wheat either, and the wheat farmer enters into a multilateral barter with even more people to eventually get an ox. Or, what if the farmer runs out of wheat and must resort to promising shares of next year's harvest?

Pure forms of the bartering economic system are extinct. Earlier in history, large economies relied widely on a barter system, but modern economies don't. Sure, you'll find remnants of it in rural areas or in developing countries, but much of the world has turned its back on bartering. It turns out the old-school system has a slew of shortcomings that makes currency a more preferable option. Read on to find out why.

One form of ancient bartering is dumb bartering. Although some may argue how smart it is, the name refers to how it's a silent process -- in this trade, no one need exchange a word. It worked like this: two parties meet in a designated trading location. One party puts down all the items he wants to trade, then signals to the other party that it's his turn. Next, the second party inspects the items and puts down items that he feels will constitute a fair trade. Then, the first party comes back and either accepts this as a fair trade, or holds out for more [source: Groz].