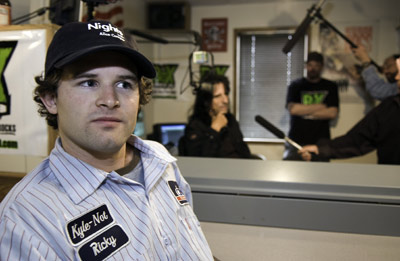 Kyle MacDonald bartered an afternoon with Alice Cooper for a KISS snow globe -- one of 14 barters he made from his way to a paperclip to a house.
Dan Koeck/Getty Images

We've seen how the barter system isn't as easy or as practical as money. But bartering has some advantages that make it a viable means of trade in some circumstances.

Like the saying goes, money isn't everything. Inflation can cause a unit of currency to lose value -- meaning that, while 50 cents could buy a bushel of apples last year, it may only buy a single apple this year. These fluctuations can hurt a society, causing stress, uncertainty and disaster to its economy. If things get bad enough, bartering, with all its disadvantages, can become an attractive alternative. This is why people resort to bartering in situations of great poverty or disaster.

Even in relatively healthy economies, folks barter. If you recall, one of the difficulties of bartering is finding someone with wants and possessions that are precisely the opposite of your own. With the advent of the Internet, this is now easier than ever. People have resurrected the ancient practice of bartering using the Internet to swap things.

Bartering networks that specialize in helping barterers find each other have popped up. For a fee, a bartering network helps you find someone who is interested in what you have to offer or someone who has what you want. Along with breaking down geographical barriers, these services also simplify the timing problem with bartering. You can find what you want quicker. Also, instead of needing to complete both sides of a transaction at one time with one other person, you can accept trade credits. If you offer goods and services for barter, instead of accepting something back immediately, you can accept trade credits. Later, when you need something, you can use trade credits to purchase it.

Businesses also find some advantages by bartering. First, when they have surplus inventory or idle workers, they sometimes trade them for other goods and services. With this type of exchange, a business reserves its cash to use for other important things like paying down debt [source: IRTA].

Mark­eting is steeped in bartering as well. For instance, a business can always trade services for advertising space. Newspapers offer ad space, shops offer the side of their building for billboard space, film producers offer product placements -- the opportunities are virtually limitless. Sponsorships and promotions work the same way. If Coca-Cola buys the uniforms for a little league baseball organization, the teams can agree to put the Coca-Cola logo on each jersey and hang banner ads in their ballpark.

Bartering is everywhere. You're bartering when you promise to bake someone brownies if he helps you move into your new place. The same goes for when you take a tenant who agrees to pay his rent by doing home maintenance and yard work. No money is changing hands, but each party is giving and getting something in return.

So what happens when April rolls around? Have you cleverly found a way around taxes with bartering? It's not that simple, unfortunately. Read on to find out why.

Bartering didn't die off as soon as money was invented. Historically, even after a civilization switched over to a steady currency, bartering was still necessary when trading with other civilizations that used different or no currency.