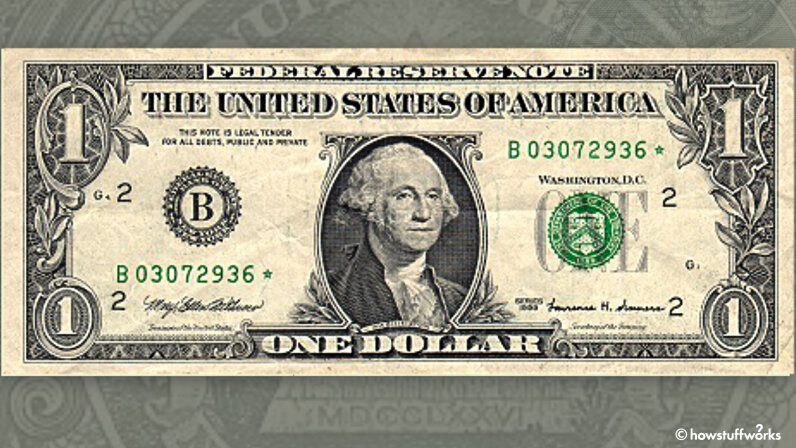 This U.S. $1 bill has been marked as a replacement note. Notice the star located at the end of the serial number. BANKNOTEWORLD/HOWSTUFFWORKS

On occasion, a bill shows up that has a small star in place of the final letter in the serial, and many early issues carried the star in front of the serial number.

This star represents what is known as a replacement note. When a printing error occurs during a normal press run and renders a set of bills unusable, replacement notes are used instead. With replacements notes, a set of serial numbers can still have the proper number of bills even if some of the original bills had to be pulled. The replacement notes have a sequence of their own, using the star as their final "letter." This allows for 99,999,999 possible replacement notes for any given bank, series and denomination. This should be more than enough: According to the Paper Money Collecting FAQ, there's about one error in every 100,000 U.S. bills.

In general, replacement notes aren't worth more than regular bills. However, if you find a replacement note with a particularly interesting serial number — like 00000001 or 999999999 — or a large number of consecutively numbered replacement notes that you keep together as a lot, you may have a collector's item on your hands.

According to Economics Stack Exchange, a site for those who study, teach and research economic issues: "The U.S. Bureau of Engraving and Printing creates all of the nation's bills, while the U.S. mint creates its coins. But they also destroy money. Banks and individuals will hand over 'mutilated' bills and coins to these agencies. They then validate its authenticity and issue a Treasury check in return. The Bureau of Engraving and Printing receives around 25,000 mutilated currency redemption claims annually. Each bill is shredded and sent to waste energy facilities for disposal."