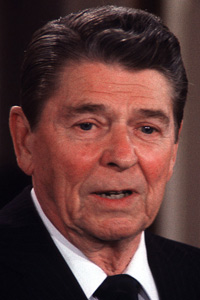 Ronald Reagan is associated with trickle-down economics because of his sweeping tax cuts.
Marshall/CNP/Getty Images

Although some characterize the trickle-down theory as an experiment originating in the 1980s under the Ronald Regan presidency, the United States had actually used it before. The Harding, Coolidge and Kennedy administrations implemented supply-side tax policies before Reagan did.

The first instance of supply-side economics being implemented came even before the trickle-down idea was fully articulated. After World War I, top income tax rates had risen from a modest 7 percent to 77 percent to help pay for the war. This high rate would fall into the prohibitive range of the Laffer Curve, according to the theory. The Harding and Coolidge administrations passed a series of tax cuts to reduce wealthy citizens' tax burden, which had ballooned. Although opponents argue that this kind of policy contributed to the Great Depression, Arthur Laffer points to the resulting increases in tax revenue, gross domestic product (GDP) and employment as evidence that the tax cuts worked by boosting production [source: Laffer].

But this policy soon faced sharp criticism. When the stock market crashed in 1929 and the U.S. economy sank into the Great Depression, the idea of giving tax breaks to the wealthy was an unpopular policy. People blamed Herbert Hoover, who'd shown support for the tax policies of his predecessors. In 1932, voters replaced him with Franklin Roosevelt, who promised the New Deal that would help the economy from the bottom up. Keynesian economics took hold.

Wealthy members of society who'd enjoyed the low marginal tax rates of the 1920s would see a dramatic reversal in the next 20 years. During the Depression and World War II, the top marginal rate rose to more than 90 percent [source: Laffer]. Enter John F. Kennedy, who was sympathetic to the idea behind supply-side economics (recall his "rising tide" comment). He argued that lowering taxes increases tax revenue, creates jobs and increases profits [source: Nugent]. His tax cuts didn't pass until after he was assassinated, but Laffer argues that they had the positive effect on the economy that Kennedy had hoped for. Others say that the cuts hurt the gross national product (GNP) growth and resulted in rising unemployment [source: Friedman].

Until Ronald Reagan was elected president, no other administration in the United States championed supply-side policies. In the late 1970s, economists like Laffer and Jude Wanniski were touting the advantages of increasing production through tax breaks for the wealthy. What they said convinced many people and fit into Reagan's economic philosophy. In 1981, Reagan passed his Economic Recovery Tax Act (ERTA), which cut all marginal tax rates dramatically (the top fell from 70 percent to 50 percent) [source: Laffer]. Since then, trickle-down theory has been tied closely to Reagan's policies, collectively named Reaganomics.

Trickle-down economics remains highly controversial. Recently, George W. Bush faced harsh criticism for his tax cuts. Despite staunch political opponents to trickle-down policies, some maintain that the general consensus among economists today is that the theory works [source: Bartlett]. Nevertheless, you'll still find plenty of controversy surrounding trickle-down economics among politicians. Many, including Barack Obama, contend that it failed. During a hurting economy, Obama won the support of voters by promising to tax the wealthy and ease the tax burden on the lower-income bracket. So as of 2008, the tide of public opinion certainly shifted away from supply-side thinking yet again. Time will tell if opinion will shift back again.