The Basics of Trickle-down Economics 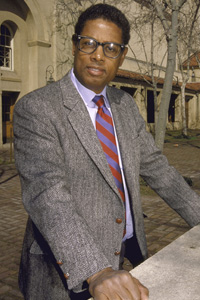 Thomas Sowell argues that "trickle down" is a misnomer because tax cuts for the wealthy help the working class before anyone else.
John Harding/Time Life Pictures/Getty Images

­Now that we have an idea of how the idea came about, let's try to put all the pieces together to understand trickle-down economics as a whole. According to Say's Law, boosting production is the key to crawling out ­of a recession. Tax breaks improve tax revenues, and according to Laffer's curve, they also boost production. Giving tax breaks to the wealthy stands as a policy meant to improve the overall health of the economy.

Opponents of this economic theory tend to believe that politicians who support it are in the pockets of wealthy businessmen. They often summarize trickle-down economics to something resembling Will Rogers' definition: The policy of giving breaks to the rich first and hoping the benefits will eventually make their way to the working classes. Proponents of trickle-down (or supply-side) economics object to this evaluation, calling it not just an oversimplification but a misinterpretation of what they hypothesize will happen.

Thomas Sowell, an ardent supporter of trickle-down theory, argues that the popular definition gets it backward. Instead of benefiting the wealthy first, the policy actually benefits the working class first. This may sound impossible -- after all, it's the wealthy who get the tax breaks, not the poor. However, Sowell maintains that because the wealthy make investments in order to make a profit, they spend the money first on expenses of the business venture. (In other words, spending money to make money.) These wealthy investors must pay workers, thus creating jobs, before they can expect to see any profits. Therefore, it's the workers who receive the most immediate relief [source: Sowell].

­While it might­ be true that some wealthy members of society seek tax breaks for self-serving purposes and might even bribe politicians into voting for these policies, trickle-down economists would consider this irrelevant to the question of whether the theory works for everyone. John F. Kennedy showed his support of the trickle-down economic theory when he said, "a rising tide lifts all boats" -- meaning that a growing economy benefits you whether you're rich or poor [source: Nugent].

Now that we know how it's supposed to work, let's take a look at the theory in action.

The World is Getting Flat

Many fiscal conservatives who support trickle-down economics also tend to support getting rid of the progressive income tax altogether. They propose either a flat tax or a national sales tax (such as the FairTax) instead, which they say will boost business. Supporters point to the success of the flat tax in the former Soviet Blocs that have adopted it, such as Estonia.