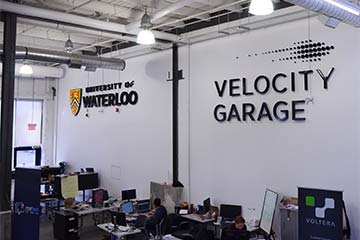 But it isn't a corporation or even a for-profit business, and it's not just a cool office building in Birmingham's hip "Entrepreneurial District." Innovation Depot is what's known as a tech incubator, an organization that supports the development of new business ideas by providing mentorship, business services and funding connections to young tech companies.

There are more than 1,250 business incubators in the United States (up from 12 in 1980), and about 37 percent focus specifically on developing technology companies [source: NBIA]. Tech incubators come in all shapes and sizes and business models.

Innovation Depot, for example, is a nonprofit organization created by a partnership between the University of Alabama at Birmingham (UAB) and the greater Birmingham business community to promote the local tech economy [source: Innovation Depot]. Thirty-two percent of American incubators are sponsored by colleges and universities and 25 percent by economic development organizations. Just 4 percent are sponsored by for-profit entities [source: NBIA].

The idea of an incubator sounds like something forged in the dot-com boom of the late 1990s, but the business incubator concept dates all the way back to 1959, when the Batavia Industrial Center was created in upstate New York [source: NBIA].

In 2015, more than 7,000 business incubators operate worldwide, some in shiny Silicon Valley industrial parks, some on college campuses, and others in developing countries [source: NBIA].

So how does a business join an incubator and what services do they offer? 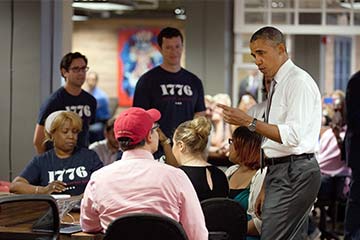 President Barack Obama makes a statement on the improving economy at the start-up tech incubator 1776 in Washington, D.C. in 2014.
© Martin Simon/CP/AdMedia/AdMedia/Corbis

Let's use the example of Innovation Depot in Birmingham, Alabama, to help us better understand the tech incubator process and why a company would want to use one.

Admitted companies move into offices inside Innovation Depot, which are leased by the month. In 2014, the building held nearly 700 employees [source: Innovation Depot]. In addition to offering the conventional office amenities like conference rooms, WiFi, copiers, kitchens and (of course) ping-pong tables, Innovation Depot devotes a portion of its second-floor real estate to cutting-edge "wet labs," where biotech companies can research and develop new products and services. Members pay rent for their office space, which provides most of Innovation Depot's revenue.

Once inside the incubator, Innovation Depot offers a suite of customized services for growing companies, many of them provided by other companies in the incubator. Let's say you have a great product idea, but you need help developing a marketing plan. Lucky for you, there are a half-dozen strategic marketing and branding firms right inside Innovation Depot.

The same is true for other business-critical services like accounting, public relations, intellectual property protection, payroll management, distribution logistics and custom software development. Not only are all of these companies physically close, but they are co-members of the tight-knit Innovation Depot community. This is one of the biggest advantages of working within an incubator, instant access to like-minded entrepreneurs offering helpful services. There are also on-site business coaches to help with strategy and planning.

To foster this sense of community and enhance the incubator experience, Innovation Depot hosts regular community-wide events. There are the traditional mixers and happy hours, but also "hackathons" and twice-monthly seminars on strategic topics in startup development and management [source: Innovation Depot]. Innovation Depot also hosts regular, weekly "Depot Connect" mixers just for member startup companies as a way to foster culture and collaboration among the entrepreneurs.

It's not an accident that Innovation Depot is only a block from the UAB campus. Colleges and universities are some of the most ardent backers of emerging technology. Major research universities have the luxury of easy access to brilliant young minds, a ready supply of research-focused faculty, and loads of expensive toys like engineering labs and supercomputers on which to test the best ideas. Thanks to bulging endowments, they also have lots of money to invest in promising ideas.

To ensure a steady supply of new ideas, these corporations might invest in the creation of new incubators like Matter in Chicago. The nonprofit health-technology incubator received $4.4 million in private funding from 20 Chicago-area companies in 2014, including several large pharmaceutical companies [source: Carpenter].

Idealab, arguably the most famous tech incubator, has a completely different business model. The California-based incubator is a private, for-profit company founded in 1996 by serial entrepreneur Bill Gross. Unlike most incubators, which accept applications from established startups, Idealab generates its own business ideas and then recruits in-house teams to grow them into viable startups [source: Idealab].

As you research tech incubators online, you might find that some are referred to as accelerators and vice versa. It's true that some incubators have become accelerators, or offer those services but the two entities are quite different.

The business incubator model has proved so successful for tech companies that many other industries are getting in on the act. Across the U.S., you'll find fashion incubators, food incubators in shared commercial kitchens, design incubators for consumer products, and even farming incubators [source: Bortolot]. 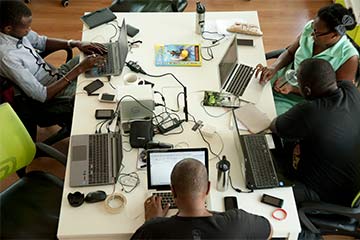 Tech incubators are a great way for fledgling tech companies to develop their business plan and connect with investors. But there's also something called a tech accelerator. In both tech incubators and tech accelerators, small teams of founders are mentored by experienced tech entrepreneurs and provided with critical services.

The terms "incubator" and "accelerator" are often used interchangeably, but the two business development models are actually significantly different.

Let's start with the clients served by incubators and accelerators. An important characteristic of tech incubators is that they are open to companies in all stages of growth and development, from the earliest-stage ideas to established companies looking to rebrand or develop a new product or service.

For example, one of the biggest success stories at Innovation Depot is Atlas RFID Solutions, an established company that moved its offices there after taking a hit during the Great Recession. With the help of Innovation Depot's in-house legal and accounting resources, plus its connections to investors, Atlas RFID Solutions re-emerged stronger than ever, boosting revenue from $200,000 in 2007 to $7.2 million in 2012 [source: NBIA].

Tech accelerators, on the other hand, target only the earliest stage companies, often nothing more than a pair of smart 20-somethings with a bright idea. Y Combinator, one of the most successful tech accelerators, puts more weight on the talent of the founders than the actual idea, which it expects will change considerably during the accelerator process. You also don't need a business plan to apply to Y Combinator.

The next big difference is the length of the development process. In an incubator, member companies expect to spend several years with the organization and treat the space like a permanent office. With most tech accelerator programs, prospective members compete for a limited amount of residencies that last only three to five months.

The final, and perhaps most important difference between tech incubators and tech accelerators is the overall mission of the organization. Incubators are mostly nonprofit ventures with a goal of kick-starting innovation in the regional economy. Incubators rarely provide upfront seed money to member companies, and they don't take a percentage of profits earned by companies they help to launch.

Accelerators, on the other hand, are often for-profit businesses founded by teams of venture capitalists and angel investors. They award $100,000 or more upfront to founders in exchange for an equity stake — between 6 to 10 percent — in their companies [source: TechStars].

That said, there are plenty of examples of hybrid incubators/accelerators. There are three-month accelerator programs run by nonprofit universities. Some incubators award money upfront. And certain companies that started out as incubators switched to an accelerator model, all adding to the confusion. In fact, Innovation Depot is launching an in-house accelerator program with the goal of providing funding to participants in key sectors.

I can get behind business incubators, especially the nonprofit variety that are created by partnerships between regional business development organizations, universities and corporate sponsors. It just makes sense — provide entrepreneurs with a ready-made network of resources to turn brilliant ideas into profitable businesses. It brings jobs to the region, pumps billions of dollars into the local economy, and encourages the kind of educated risk-taking that often leads to breakthrough technologies. Maybe I'll start a freelance writing incubator in my basement. On second thought, who needs the competition?