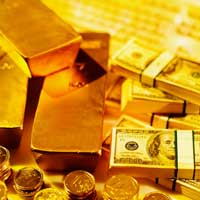 Stockbyte/Getty Images The U.S. left the gold standard in 1971.

One of the long-standing myths about modern currency is that it is backed by the U.S. gold supply in Fort Knox. That is, you can trade your greenback dollars to the U.S. government for the equivalent amount of gold bullion at any time.

At one point, this was true of most paper currencies in the world. However, the U.S. took away the government backing of the dollar with an actual gold supply (known as leaving the gold standard) in 1971, and every major international currency has followed suit.

The obvious question is, "Without gold, what does guarantee the value of our money?" The answer is: nothing at all.

The only reason a dollar, or a franc, or a Euro has any value is because we have a stable system in which people are known to accept these pieces of paper in return for something valuable. Or, as Nobel Prize-winning economist Milton Friedman puts it, "the pieces of green paper have value because everybody thinks they have value."

About Face: The U.S. Currency Portrait Quiz
How White-collar Crime Works
Would you pay $55 for bottled water?