10 Ways to Build a Nest Egg 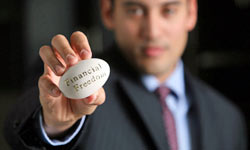 Retirement Pictures More than half of all Americans haven't figured out how much they need to save for retirement. See more pictures of retirement.
©iStockphoto.com/Jason York

Located just outside Mobile, Ala., the small town of Prichard has seen its share of hard times. But nothing could compare to what happened when retired town employees, including the fire captain and police officers, stopped receiving their pension checks. Pension experts told the town that its retirement fund would run out of money by 2009. It did. Then town leaders did something no one had ever seen before -- they stopped sending monthly pension checks to its 150 retired employees, breaking the law in the process [source: Cooper and Walsh].

The move forced many retired workers to reluctantly join the job market again. The retired fire captain went to work as a security guard. The retired fire marshal died; when his body was found, there was no electricity or running water in his house. One former police offer filed for bankruptcy [source: Cooper and Walsh].

The story of Prichard is a cautionary tale of what could happen when retirement plans crash and burn. In most instances people don't plan for their retirement. In other cases, bad decision making or official malfeasance ruins their lives. Remember Enron? Its collapse in 2001 wiped out the retirement savings of thousands.

The retirement picture in the United States is bleak. More than half of all Americans have not figured out how much they need to save for retirement [U.S. Department of Labor]. Moreover, 13 percent of private sector employers in 2009 did not participate in a 401(k) or some other type of defined retirement contribution plan [source: [U.S. Department of Labor]. In addition, the percentage of workers who have less than $10,000 in savings grew to 43 percent in 2010, an increase of 4 percent from 2009 [source: Sutton]. Workers who said they had less than $1,000 in savings grew to 27 percent from 20 percent in 2009 [source: Sutton].

To help stave off economic ruin in retirement, or to make sure your golden years are comfortable, financial planners advise clients move fast to build their nest eggs. Retirement is expensive. Experts say you will need 70 to 90 percent of what you make now to retire comfortably [source: U.S. Department of Labor]. The key is to save. If you have been saving, keep going. If you haven't, start.

Go on to the next page to find 10 ways to build a nest egg.