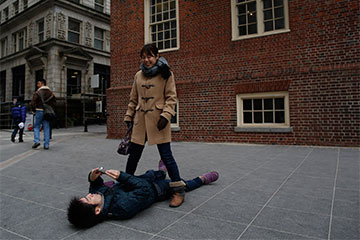 Hisashi Ueta, a Japanese student at Massachusetts General Hospital, lies down to get a better angle as he takes a picture of his wife. Foreign students like Ueta are exempt from certain taxes as they're considered nonresident aliens.
Jessica Rinaldi for The Boston Globe via Getty Images

Aliens are living among us. For all you know, your neighbor could be an alien, or the student sitting next to you in class, or the doctor writing your prescription. "Alien," after all, is the term that the United States government uses to describe anyone living in America who is not a U.S. citizen. By that measure, E.T. was not only an extraterrestrial, but also an alien.

A nation of immigrants, the U.S. welcomes foreign citizens to live legally as temporary or permanent workers, students, teachers, researchers and the occasional power forward for a professional basketball team.

The IRS also welcomes the tax dollars of foreigners living and working in the U.S. For tax purposes, the IRS distinguishes between non-U.S. citizens living in America permanently and those who are only visiting or studying in the U.S. temporarily:

Keep reading to find out what kinds of tax breaks and exemptions are available to nonresident aliens, and to find out how much foreign athletes pay in taxes.

The good news is that if you qualify as a nonresident alien, the IRS only wants to collect income tax on money that you made in the United States. To make things simple — hah! — the IRS has identified two broad categories of nonresident income that are subject to U.S. taxes:

Why does the IRS differentiate between ECI and FDAP income? Because the feds tax the two types of nonresident income at different rates. Effectively connected income is taxed at the same graduated income tax rates that U.S. citizens pay. The more you earn in ECI, the higher your effective tax rate will be. The biggest difference between resident and nonresident tax rates is that married nonresidents cannot file jointly [source: IRS]. The only way a nonresident can file jointly is if they are married to a U.S. citizen or resident, at which point they would file a regular tax return.

FDAP income is taxed at a flat rate of 30 percent [source: IRS]. It's important to note that FDAP is not the same as a capital gains tax. Non-U.S. citizens only have to pay capital gains tax on the sale of stock and other capital assets if they reside in the U.S. for 183 days or more during the tax year. That capital gains tax rate is also 30 percent.

To further confuse things, there's a completely separate capital gains tax for the sale of real property by a foreigner, regardless of his or her status as a resident or nonresident alien. If a non-U.S. citizen sells a piece of U.S. real estate, 10 percent is withheld from the sale price as a capital gains tax [source: IRS]. Higher tax rates apply to real property sold or distributed by foreign corporations.

The U.S. has signed tax treaties with governments around the world offering certain tax exemptions to foreigners working on American soil. For example, residents of Mexico who are self-employed in the U.S. for no more than 182 days in a 12-month period are exempt from U.S. income tax [source: IRS]. Browse the full list of tax treaties.

Withholding and Deductions for Nonresident Aliens

There are substantially different rules for resident and nonresident alien taxpayers when it comes to withholding taxes and claiming tax deductions and exemptions.

For example, both U.S. citizens and resident aliens are required to have income taxes withheld from each paycheck. A nonresident alien, however, can submit IRS form W-8ECI to claim that income from a specific source is effectively connected income (ECI), which is exempt from withholding [source: IRS].

When it's time to file taxes in April, nonresident aliens complete the 1040NR. As we mentioned earlier, they cannot file as married filing jointly. They also can't file as head of household. The only available filing statuses are single, married filing separately and qualifying widow(er).

Even if you are in the U.S. illegally, you are still required to file an income tax return if you worked. If you don't have a Social Security number, you can use an individual taxpayer identification number (ITIN) which you can get from the IRS. The IRS does not turn over information to immigration authorities [source: Illinois Legal Aid]. 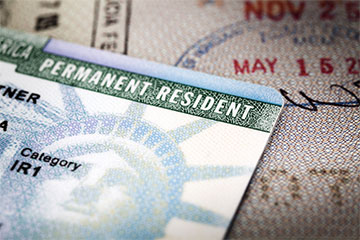 United States colleges, universities and research centers are magnets for ambitious students and scholars from around the world. The federal government recognizes the advantages of having the world's best minds working on American soil. For this reason, the U.S. Department of State extends temporary visas to students and scholars, and the IRS offers certain tax breaks and exemptions to income earned during their stay.

For starters, the IRS allows foreign students, teachers, trainees, employees of international organizations, and diplomats and their families to qualify as nonresident aliens even if they spend more than 183 days in the country. The IRS calls these visa holders "exempt individuals," not because they are exempt from taxes, but because they are exempt from counting days of presence in the U.S. [source: IRS]. That's a huge tax advantage, because nonresident aliens only have to pay income tax on wages earned from U.S. sources.

Secondly, any student, scholar, trainee or diplomat holding a qualified visa is exempt from withholding Social Security and Medicare contributions from their paychecks. Self-employed individuals with the same visas are also exempt from the self-employment tax [source: IRS].

There's a catch when it comes to capital gains tax, though. The tax law says that any nonresident alien residing in the U.S. for 183 days or more is liable for a 30 percent taxation of capital gains [source: IRS]. In this case, there are no exemptions for students, scholars and diplomats. Each day of residence counts toward the total.

Foreign athletes temporarily in the U.S. for sporting events are among the list of "exempt individuals" for counting their days of presence, but that's where the tax breaks end. Both foreign athletes and entertainers are subject to a flat 30 percent income tax withholding on all earnings during their stay, unless they have a really good tax lawyer who can navigate the IRS rules, which even the agency admits are "complex."

For lots more information about tax exemptions and creative (but legal) tax deductions, check out the related HowStuffWorks articles on the next page.

My family and I lived abroad in Mexico for six years. Two of my children were born in Mexico, but both my wife and I are passport-carrying Americans. While in Mexico, my wife worked for an international school and the staff there handled all of the paperwork for Mexican income taxes. I worked as a freelance writer for American newspapers and magazines, so I didn't bother paying income tax in Mexico. Researching this article, though, I'm starting to wonder if I should have. Sadly, skirting income tax is a proud tradition in Mexico, so it's unlikely that anyone would ever come after me for a few spare pesos. In the meantime, I'll continue to live by my credo: Ignorance of foreign tax laws is bliss.