by Garth Sundem
Prev NEXT
6 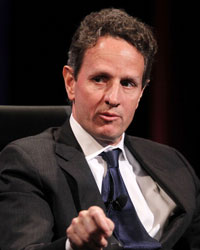 The United States Secretary of the Treasury is the top dog of American fiscal policy, a cabinet-level position, and fifth in line for the Presidency. He or she can do neat things like manufacture money. The appointment of a Treasury Secretary is dependent on Senate confirmation.

It was during Tim Geithner's confirmation hearing that the spotlight hit his own tax record. It turned out that nominee Geithner had failed to pay payroll taxes on monies he received from the World Monetary Fund for the four years starting in 2001 [source: Wall Street Journal]. Geithner claimed it was a simple mistake. However, the Wall Street Journal points out that perhaps the most embarrassing piece of the debacle was Geithner's actions upon discovering the slip-up: He paid back taxes on two of the four years. The statute of limitations for the first two years had expired before the skeleton fell from the closet.

Despite some admittedly sloppy personal bookkeeping, followed by amends that met the letter if not the spirit of the law, Geithner was confirmed and took office in January 2009.