by Garth Sundem
Prev NEXT
10 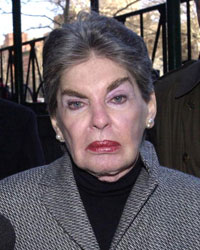 In 2007, Leona Helmsley passed away at her Connecticut home at the age of 87.
Keith Bedford/Getty Images

Leona Helmsley has never been known for her sweet disposition. When she learned that the Woodlawn Cemetery in the Bronx, where her late husband and son are laid to rest, made plans to construct a low-cost, 2,000-person mausoleum on the site, she sued for $150 million, claiming the building would disrupt the serenity and peace she was promised for her family's eternal resting place. She cut two grandchildren out of her will, but left $12 million to her dog, a Maltese named Trouble. And even the dog was mean. A former housekeeper is quoted in the NY Daily News saying, "One time she bit me [the dog, not Helmsley], she was chewing on my fingers, and Leona said 'Good for you, Trouble, she deserved it!'" [source: NY Daily News].

But nothing beats the Queen of Mean's 1989 quote, printed in the New York Times, in which Helmsley said, "We don't pay taxes. Only the little people pay taxes." [source: New York Times]. Leona did 19 months plus two months house arrest on a 16-year sentence.