What is a trustafarian? 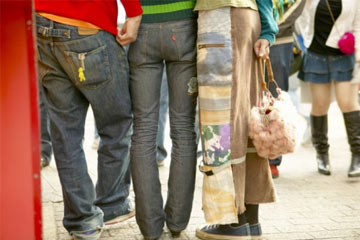 Trustafarians are typically wealthy, white kids in their 20s living off trust funds provided by their parents.
Jupiterimages/Thinkstock

While there have always been wealthy people living the life of leisure on money they have inherited, the term trustafarian refers to a particular subset of the wealthy. A combination of the terms trust fund and Rastafarian, the trustafarian is a 20th-century phenomenon, though it's not known exactly who coined the term. The word has appeared throughout pop culture in numerous articles relating to finance and economics, including major media outlets like the Huffington Post, The New York Times and The Village Voice. Author Brian Griffin published an entire book on the topic, "The Trustafarian Handbook: A Field Guide to the Neo-Hippie Lifestyle -- Funded by Mom and Dad," and Oxford even includes trustafarian in its dictionaries [source: Oxford Dictionaries].

So what exactly are a trustafarians? Typically they are wealthy, white adults, generally in their 20s, who are in many ways, modern-day hippies. They tend to draw scorn and disdain from members of traditional culture because their laidback lifestyle is supported entirely by their parents' money, often in the form of trust funds, (hence the trust in trustafarian) [source: Huffington Post]. Although they're decidedly well off, trustafarians imitate many of the cultural traditions of the Rastafarians, who represent a poor, oppressed social class.

The Rastafarian movement originated in Jamaica in the 1930s, combining aspects of Christianity and mysticism with an African political consciousness [source: Brittanica.com]. The movement is named after the Ethiopian emperor Haile Selassie I, whose name before becoming emperor was Ras Tafari. Rastafarians believe Selassie to have been the second coming of Christ [source: Brittanica.com]. Reggae music, now popular around the world, grew out of the Rastafarian movement. Also characteristic of the movement is the smoking of ganja (marijuana) for the purpose of meditation and prayer -- a habit the trustafarians have adopted for largely recreational purposes, with little or no religious significance.

So who exactly are these trustafarians, and who is footing their bills?

Rebels Without a Cause?

Some rich kids find it insulting to be called trustafarians, and others actually try to hide the fact that they're living off money they've inherited from mom and dad [source: Kamenetz]. But many people find it hypocritical for these wealthy kids to take on the external trappings of a Rastafarian lifestyle. Trustafarians may think of themselves as idealistic or iconoclastic, but others are likely to see them as lazy, pretentious and spoiled [source: Griffin]. While the Rastafarians adopted certain habits and styles as an outgrowth of their religious and political beliefs, the trustafarians have latched on to these traditions mainly to distance themselves from their privileged social position, creating a persona that's essentially misleading.

Trustafarians generally don't work, not because of economic injustice and discrimination, but because they don't need to in order to support themselves. Some may spend time on creative or volunteer pursuits that earn little or no money, while others seem to enjoy unlimited time for leisure and partying. Many trustafarians see themselves as rebelling against society by refusing to work full-time jobs, conveniently ignoring (and often hiding) the fact that their rebellion is funded by their parents' money [source: Haughney].

Because trustafarians have significant funds, they can afford to attend expensive colleges and to travel the world. They often congregate at performances of certain bands. The now-defunct Grateful Dead was probably the most popular group among trustafarians, but newer groups, including Phish and other "jam bands" are also popular. At concerts, smoking marijuana is common, and trustafarians enjoy an atmosphere similar to that of Woodstock in the '60s. Many use their extensive free time to follow these bands on tour around the country.

Trustafarians can be found across the United States, Europe and beyond, because they have both the money and the free time to travel. In particular, they may head for locations like Thailand, India and Nepal, countries with spiritual traditions they find appealing.

However, the trustafarian lifestyle is always precarious in that it depends on the goodwill and financial stability of mom and dad. In Williamsburg -- a popular neighborhood in Brooklyn for the trustafarian set -- for example, it's been common for wealthy parents to foot the exorbitant rent and bills for their children. But that trend's been changing since 2008. Parents who used to be willing to hand over $250,000 or more to their kids for down payments on plush apartments are scaling back those handouts to, um, smaller amounts like $50,000 instead [source: Haughney]. And in the United States at least, the struggling economy means that more and more wealthy parents have had to greatly reduce the support they can offer, leaving their children facing the daunting reality of cutting their hair, donning office attire and joining the workforce.