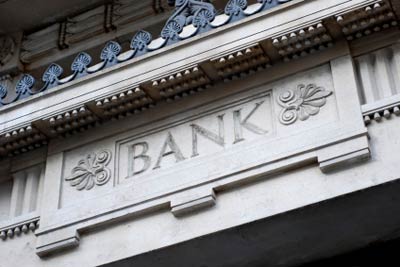 Banks are one of the best places to buy treasury bills. At a bank, you can also discuss your options with an expert before purchasing. See more banking pictures.
© iStockphoto/ilbusca

Would you like to put money aside and earn significant interest returns in only a few weeks or months? You might consider buying treasury bills, a popular and accessible form of investment. You don't have to be rich to afford them, and they are simple and virtually risk-free.

Treasury bills, also known as "T-bills," are a security issued by the U.S. government. When you buy one, you are essentially lending money to the government. Here, the term security means any medium used for investment, such as bills, stocks or bonds.

Treasury bills have a face value of a certain amount, which is what they are actually worth. But they are sold for less. For example, a bill may be worth $10,000, but you would buy it for $9,600. Every bill has a specified maturity date, which is when you receive money back. The government then pays you the full price of the bill -- in this case $10,000 -- and you earn $400 from your investment. The amount that you earn is considered interest, or your payment for the loan of your money. The difference between the value of the bill and the amount you pay for it is called the discount rate, and is set as a percentage. In the example above, the discount rate is 4 percent, because $400 is 4 percent of $10,000.

Treasury bills are one of the safest forms of investment in the world because they are backed by the U.S. government. They are considered risk-free. They are also used by many other governments throughout the world.

Read on to find out about the different kinds of treasury bills, how to buy a treasury bill, and why they are so popular.

The Origins of Treasury Bills

Treasury bills were first used in the United States during World War I, as a source of emergency funds to help balance the unprecedentedly high public debt. By the end of World War II, T-bills had become the most popular form of short-term government security. 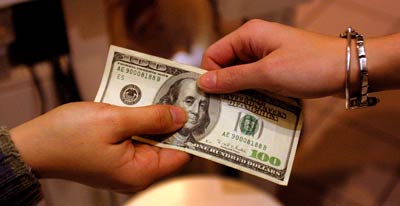 Treasury bills are one of the few investments you can make for as little as $100.
Photo by Joe Raedle/Newsmakers/Getty Images

All treasury bills are short-term investments and mature within a year from their date of issue. You have the option of buying bills with maturity periods of one month, six months or one year. Generally, the longer the maturity period, the more money you will make from your investment. The face value of a treasury bill is called its par value, and the most commonly sold bills have a par between $1,000 and $10,000. The minimum amount you can buy a bill for, though, is $100. T-bills are sold in increments of $100 up to $1 million [source: TreasuryDirect].

The purpose of treasury bills is to help finance the national debt. They are a way for the government to make money from the public. People and corporations can buy treasury bills.

There are many reasons why treasury bills are popular. Not only are they affordable enough that almost anyone can buy one, but they offer fast returns, and they are simple, easy to understand and very reliable. Additionally, the money you gain from investing in treasury bills is exempt from state and local taxes. You do have to pay federal income tax on it, however. Treasury bills are also a highly liquid form of investment. This means that they are easily tradable. They can be sold on the secondary market and easily converted into cash. If you sell a bill on the secondary market, you sell it to someone else instead of waiting for it to mature.

One of the only downsides to treasury bills is that the returns are smaller than those from many other forms of investment. This is because they are so low-risk.

Treasury bills have not always been as accessible as they are now. Starting in 1998, the minimum amount you could purchase a treasury bill for was $1,000. As of April 7, 2008, however, it is possible to buy bills for a minimum of only $100 and in all increments of $100. This makes treasury bills more versatile and available to more people than ever before [source: TreasuryDirect].

How to Buy a Treasury Bill 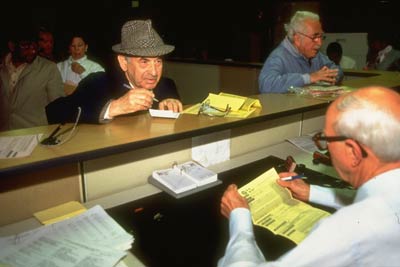 You can purchase treasury bills at a bank, through a dealer or broker, or online from a website like TreasuryDirect. The bills are issued through an auction bidding process, which occurs weekly. Treasury bills are now issued only in electronic form, though they used to be paper bills.

In competitive bidding, on the other hand, you specify the return you want to receive. This kind of bidding is usually done by corporations and people who really understand the supply and demand of the securities market. It is more complicated because you don't know whether your bid will be accepted. If the rate of interest you specify is less than or equal to the rate set by the auction, your bid will be accepted, and you'll receive the uniform rate. This rate is called the highest accepted yield, and is what all accepted bidders receive, even if they bid for less. For example, if all bids with discount rates between 1.15 percent and 1.25 percent are accepted, you will receive 1.25 percent even if you bid lower. If your bid is higher than the rate set by the auction, however, it will be rejected.

Until 1998, not all bidders received the same discount rate. Rates used to vary according to a range of accepted bids above the so-called cut-off yield. The bidders closest to this cut-off received the highest returns, while people who bid higher (that is, demanded a lower discount rate) got what they asked for and received fewer returns. Now there is still a range of accepted bids, but all bidders receive the highest accepted yield [source: Beginner Money Investing].