If I change jobs a lot, should I consolidate my retirement accounts?

Browse the article If I change jobs a lot, should I consolidate my retirement accounts? 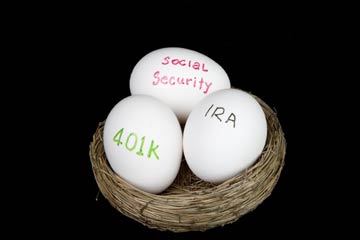 Should you put all your retirement eggs in one basket? See more money pictures.
iStockphoto/Thinkstock

This is a question that every American worker should be asking. Long gone are the days of staying with the same company for an entire career. According to the U.S. Bureau of Labor Statistics, even the youngest baby boomers worked an average of 10.2 different jobs from ages 18 through 38 [source: BLS]. The millennial generation (born between 1977 and 1997) jumps ship even faster, projected to hold an average of 15 to 20 jobs over the course of their careers [source: Meister].

Not all jobs offer retirement benefits, but if you are lucky enough to receive a 401(k) plan, you need to think about what you want to do with that account if (more like when) you leave your job. According to retirement planning experts, you have three major options:

What you absolutely positively should not do is cash in your 401(k) when you change jobs. If you are younger than 59½, not only will you have to pay income tax on that money, but you will owe an additional 10 percent "early distribution" penalty. Let's say you're in the 28 percent tax bracket and you have $10,000 saved in your 401(k) account. If you withdraw the money early, you will lose $2,800 to taxes and an additional $1,000 to penalties, leaving only $6,200 in your pocket.

It's important to understand that you, the employee, are responsible for managing your retirement accounts, not your employer [source: Wohlner]. So even if the thought of comparing 401(k)s to IRAs makes your head spin, take time to do your homework and take charge of your retirement planning. You'll thank yourself later.

Let's start by looking at the benefits of leaving your 401(k) right where it is.

Keep Your 401(k) with Your Old Employer

The biggest headache of leaving your retirement savings in your old employer's retirement plan is trying to keep track of multiple retirement accounts. But if you are the kind of highly organized person who doesn't mind receiving and deciphering multiple earnings summaries, consider the advantages of leaving your 401(k) savings right where they are.

Before you quit your current job, you need to check with your human resources department about the company's "vesting" policy. One of the greatest perks of a 401(k) is that your employer matches a percentage of your contributions. But at some companies, those matching employer contributions are deleted if you leave the company before you are "fully vested" [source: Brandon].

Vesting policies differ from company to company. Some use a gradual scale where you get to keep 25 percent of matching funds for each year with the company. Others don't give anything if you leave before four or five years [source: Investopedia]. If you are very close to being fully vested, it might be worth sticking with your current job for a few more months to save potentially thousands of dollars in free money.

It might be tempting to roll over your old 401(k) money into an IRA, but there's a catch if you plan on retiring early. With a traditional IRA, if you retire at 55 and want to withdraw money from your account, you will most likely be slapped with an early withdrawal penalty. (With a Roth IRA, you can withdraw the money at any time since you already paid taxes on it.) There are exceptions for first-time home buyers, educational expenses and certain medical expenses. With a 401(k), however, you can withdraw money penalty-free if you retire at age 55 or older [source: Anderson].

Now let's look at the advantages of consolidating your retirement accounts in a new 401(k) or a rollover IRA.

The huge advantage of consolidating your old and new 401(k) accounts when you change jobs is that all of your money is in one place. You don't have to keep track of as much paperwork, and it's easier to balance the diversity of your portfolio if it's all right there on the same investment summary. You may also save money on fees if they are lower at your new 401(k) versus your older one. If you decide to move the money out of your old 401(k), you have two options: transfer it into a 401(k) at your new job or roll over the funds into an IRA.

Obviously, the first option is only possible if you already have a new job and your new company offers a 401(k) plan. The most important thing to understand when moving money from one 401(k) to another is the difference between a transfer and a rollover.

In a transfer, your old company sends a check directly to your new company and the money never passes through your hands. That excludes you from having to pay income tax on that money.

In a rollover, however, your old company makes the check out to you. Now it's your responsibility to deposit the full amount in your new 401(k) within 60 days or the money is taxed as income and you are slapped with an early withdrawal penalty if you're younger than 55. To make things more complicated, your old employer has to withhold 20 percent of your account balance, which will be returned to you as a tax refund. In the meantime, you need to come up with that 20 percent from your own savings in order to deposit the full account balance in your new 401(k). So remember: "Transfer good. Rollover bad."

If your new job doesn't offer a 401(k), or you don't have a new job yet, your other option is to roll over your old 401(k) funds into an IRA. In this case, "rollover" isn't a four-letter word. The money is sent directly to the IRA fund, and you aren't on the hook for any taxes. Most major investment firms offer rollover IRAs, although the fees vary, so shop around.

With a traditional IRA, you are required to start taking withdrawals from your account at age 70½, even if you are still working. There is no such requirement for a 401(k) plan with your current employer, meaning you can let your savings continue to grow if you delay retirement [source: Vernon]. Note that the exception only applies to your current employer's plan, not an old 401(k) — another good reason to consolidate.

Author's Note: If I change jobs a lot, should I consolidate my retirement accounts?

Young people should not be trusted with their retirement planning. I remember when I opened my first 401(k) account at my first real job with benefits. Despite the helpful pamphlet from human resources, I had no idea how much I should be investing in this thing. "You want to take how much out of each paycheck?" Retirement seemed like a lifetime away, and when I left that job a few years later, it was very tempting to cash in the few thousand bucks I had stashed away under the radar. I owe my father — a consummate and conservative financial planner — a big "thanks" for convincing me to roll over the money into an IRA, which we later converted to a Roth IRA. As I said, young people should not be trusted with retirement planning. Let's hope I remember my father's advice when my own kids get their first 401(k).