10 Things You Should Buy in Bulk

Browse the article 10 Things You Should Buy in Bulk 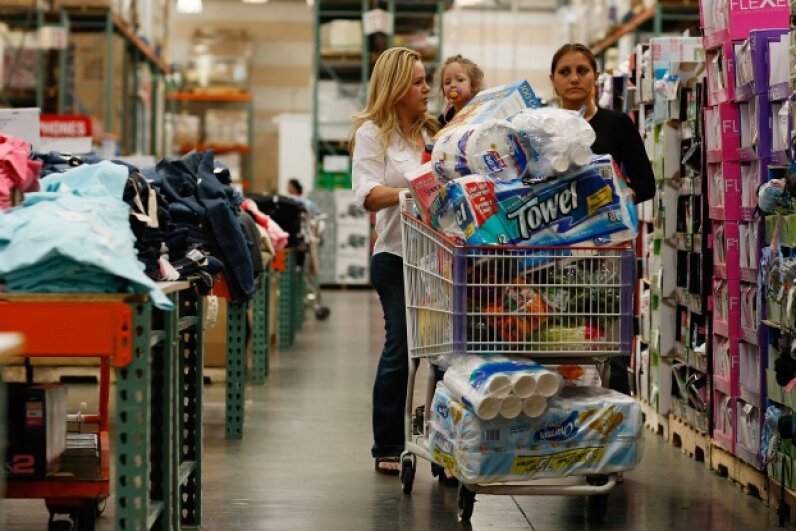 If you're smart about it, buying in bulk can save you a ton of cash. Getty Images News / Thinkstock

The jokes about warehouse clubs are pretty easy to make. The idea of buying a 3-gallon tub of mayonnaise and rushing to use it before it goes bad may not seem like many people's idea of a good bargain. But warehouse clubs like Sam's Club, BJ's Wholesale Club and Costco offer major discounts to customers on several name-brand and high-quality foods and household goods. They're able to offer savings by keeping costs low, making deals with suppliers and selling products in those ridiculously large packages. For an annual fee ranging between $40 and $50, the clubs sell merchandise at profit margins well below retail competitors [source: Warehouse Club Focus]. But not all bulk shopping deals are created equal. In general, you want to buy things you'll actually use, and won't go to waste. To avoid spending the rest of your life eating from the same tub of ranch dressing, and to take advantage of some good bargains, read the following list of 10 things you should buy in bulk. 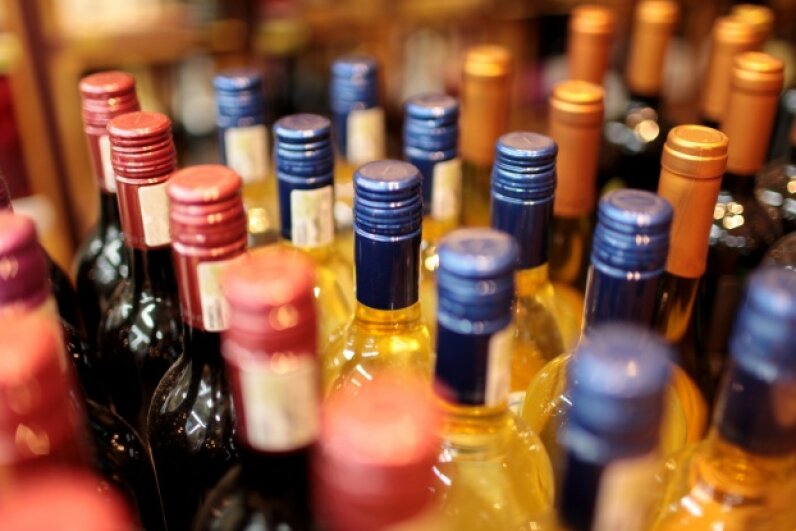 Shop the bargain stores to score wine, beer and spirits at a percentage of the regular price. iStock/Thinkstock

In states that allow alcohol sales in grocery stores, warehouse clubs offer some impressive deals on beer, wine and spirits. For example, bottles of Corona beer cost about 25 percent less at the price clubs compared to retail chains [source: Consumer Reports]. A bottle of Grey Goose premium vodka costs about 15 percent less [source: Grant]. But the biggest advantage to buying alcohol at stores like Costco and Sam's Club is that often you don't even need to pay the membership fee to enjoy the bargains. At Sam's Club, no membership is required to buy alcohol. The same is true of Costco and BJ's locations in certain states, including California, Massachusetts and Michigan. The loophole dates back to post-prohibition laws in some states that don't allow sales of alcohol through members-only arrangements [source: Grant]. 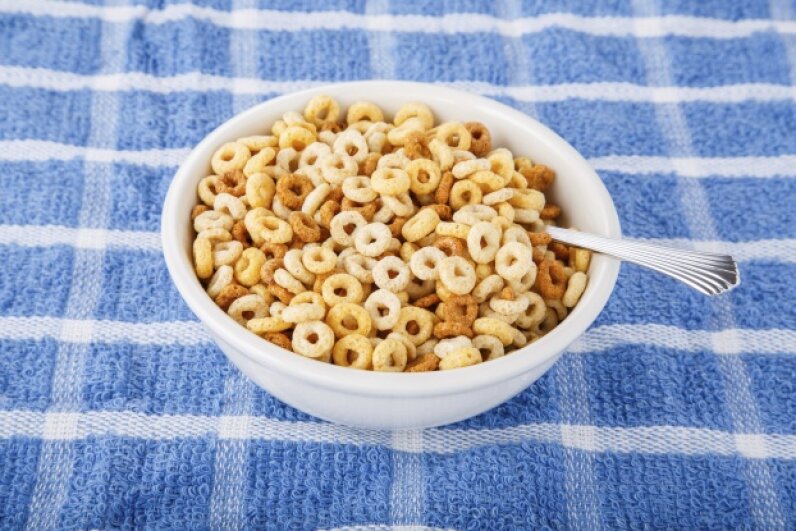 The mark up on cereal is often high, so stocking up when prices are right is a good idea. iStock/Thinkstock

Markups on cereal, especially name-brand cereal, tend to be pretty high. So warehouse club savings of close to 50 percent for bulk sizes can be hard to pass up [source: Wallet Pop]. And most of the warehouse clubs carry double-sized boxes of brand-name cereals. Supermarkets also offer regular sales on certain brands, so that can be a good time to stock up. But like anything else, be sure that you're not sinking money into a brand or flavor that you'll be tired of quickly, or buying so much that the same kind gets tiresome. That can be especially important if you have children whose tastes might change from week to week. 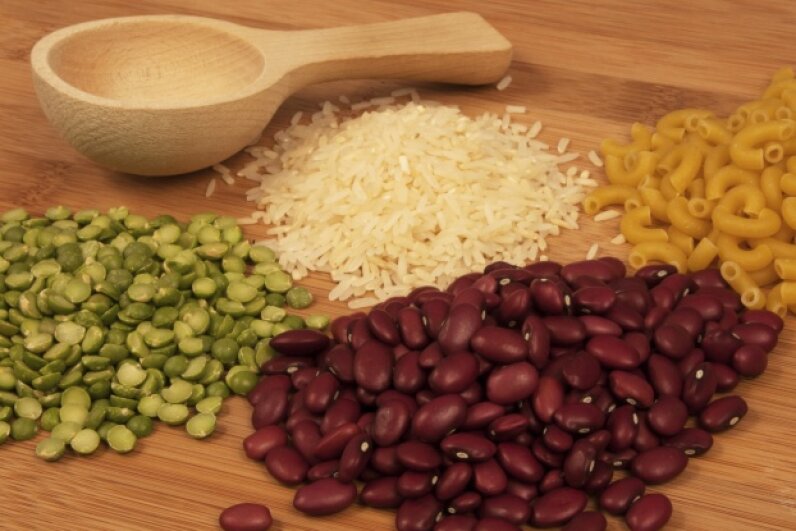 Dried beans and dried pasta are great pantry fillers, because they last so long and take up relatively little space. Dried pasta will last up to two years in a sealed container [source: Shelf Life Advice]. Dried beans, on the other hand, will last about a year [source: Utah State University]. That long shelf life makes them ideal for bulk buying. You can save a lot of money buying beans and pasta either in large containers at warehouse clubs, or by filling your own containers from bulk storage bins at health food stores. For example, whole wheat pasta bought in bulk costs 20 percent less, and dried black beans cost 32 percent less [source: Bailey]. Try to add some variety so that you can have different types of beans and pasta throughout the year or two that they'll last. 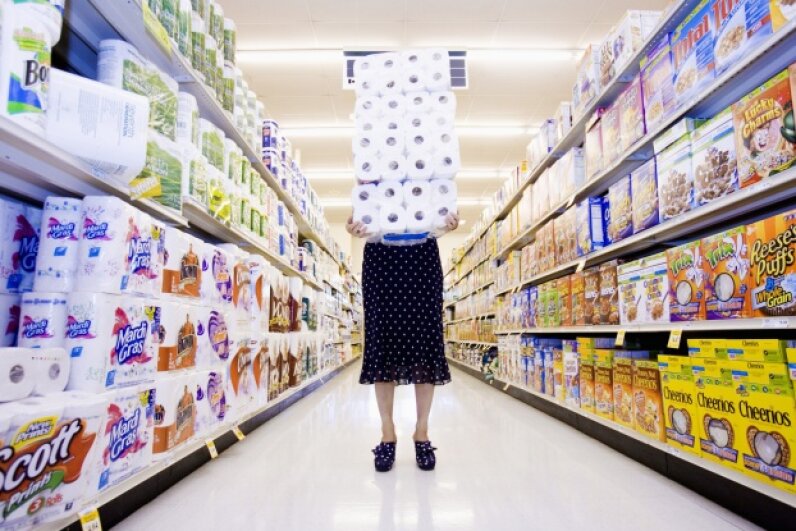 You can save as much as 50 percent on paper towels and toilet paper when you buy them in bulk. Big Cheese Photo/Thinkstock

Toilet paper, paper towels and other paper products are among the most competitive product lines sold in the warehouse clubs. Chain grocery and department stores regularly have sales and offer coupons that approach the deals offered at the warehouses. So, to get the best value on big bulk purchases, shop around and wait for a good deal to come along. Depending on the sale and the store, bulk savings can approach 50 percent off regular prices [source: Wallet Pop, Consumer Reports].

Paper products are usually a pretty good bulk purchase, since they obviously never spoil or expire, and running out of them unexpectedly can be a big nuisance. But never having to run to the corner to buy a role of TP is only convenient if you have room to store your surplus. So, buy only amounts that you can comfortably accommodate. 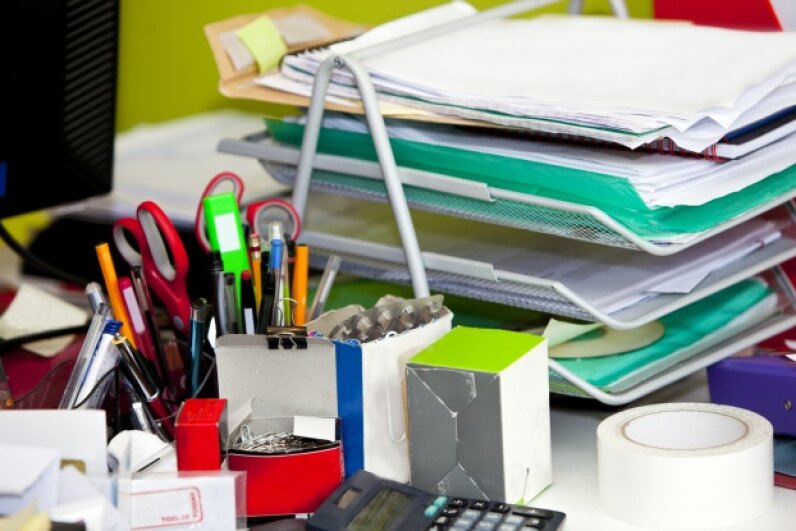 The federal government has started purchasing its office supplies in bulk and estimates it could save $200 million a year. moodboard/Thinkstock

Even the United States federal government has taken advantage of bulk shopping to improve its bottom line. In the summer of 2010, the U.S. Office of Management and Budget announced a program to buy pens, paper and other office supplies in bulk for the entire U.S. government, instead of agency by agency. Then OMB Director Peter Orzag projected that buying the supplies in bulk could save $200 million on office supplies per year [source: Orzag].

Buying office supplies in bulk at warehouse clubs or stocking up at discount office supply chains like Staples, can result in some big savings. For example, a quick price comparison showed that standard Bic pens at Staples and Costco cost about 50 percent less per pen than comparable pens at regular department stores [source: Staples, Target]. Similarly, recordable CDs bought in bulk from Staples during a sale are often priced around a third of the price at other stores [source: Staples, Target]. Costco's CDs sell for about half of the list prices of its competitors [source: Costco]. 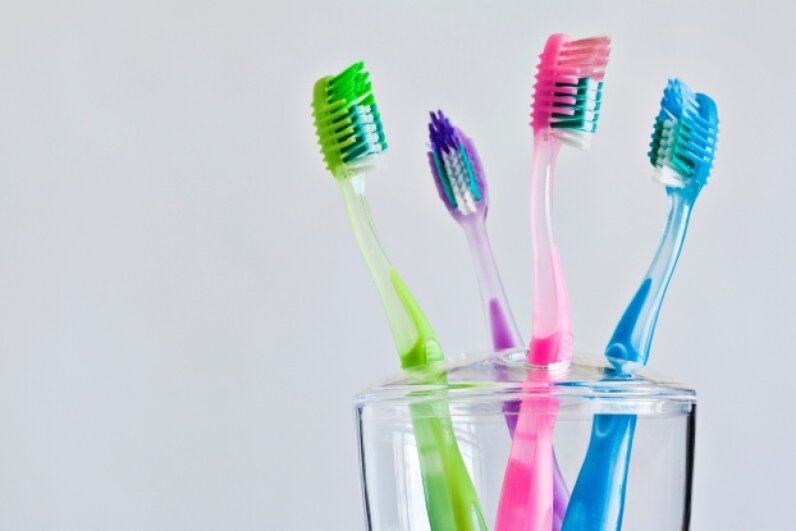 You can often find coupons that make toothbrushes an even better buy. Ingram Publishing/Thinkstock

Toothbrushes may seem like strange items to buy in bulk, but even buying six to 10 at a time, instead of the just one, can add up to savings in the long run. For example, recently a box of six Oral B brand toothbrushes cost $13.88 at Sam's Club, while a box of two cost $7.99 at Rite Aid [source: Switchyard Media]. Dentists recommend that you start using a new toothbrush after three months, but the average American waits nine months to make the switch [source: Malitz]. So keeping a bulk supply can help improve your dental hygiene. You can also offer your extra toothbrushes as spares for forgetful house guests [source: Torabi]. 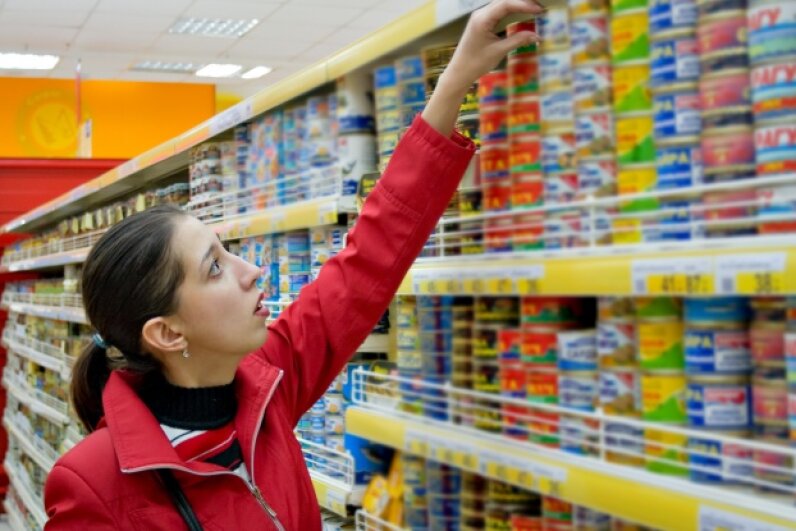 Canned food usually has a long shelf life, so it's a good item to stock up on. Hemera/Thinkstock

A good rule of thumb when doing any bulk shopping for food is to avoid buying anything that will expire or spoil before you have a chance to use it. The best bulk purchases for the kitchen are items that have long shelf lives. That way, you can spread out the consumption and not get tired of the pallet of food you've just bought. Good examples include canned goods or boxed goods with distant expiration dates. Products like canned tuna or soup can be great values; both are around 30 percent cheaper in bulk at the warehouse clubs than at standard grocery stores [source: Wallet Pop]. A staple like rice also makes a good choice. Rice is very inexpensive in large quantities, and white rice can last up to a year. But be careful. Brown rice has a shorter shelf life of only about six months [source: Shelf Life Advice]. Another surprisingly good investment is pepper, which can last one to three years if you buy whole peppercorns. But ground pepper lasts only six months to a year [source: Shelf Life Advice]. 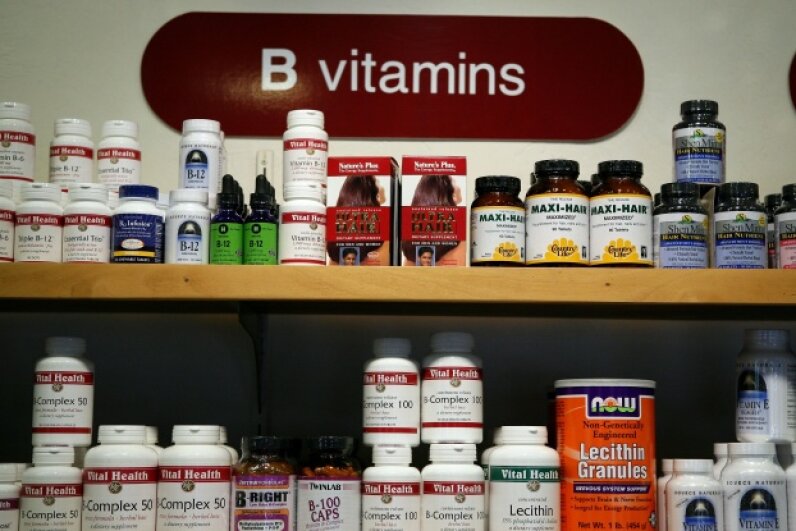 If you purchase vitamins in bulk, be sure you'll be able to use them before the expiration date. Getty Images News/Thinkstock

You can get a great value on multivitamins either through the big warehouse clubs, or simply in larger quantities from your usual grocery store. Multivitamin prices at Sam's Club are around 6.7 cents a pill, and stores like Walgreen's have prices closer 9.3 cents per pill [source: Switchyard Media]. But coming home with a bottle of 500 pills is only a good value if you plan to take them all, so keep expiration dates in mind. Depending on the amount of people in your household and how often they take vitamins, you may not be able to go through that large of a supply before the pills expire. In general, vitamin tablets last about four to five years, but expiration dates often vary by manufacturer [source: New York Times]. So calculate how much of a supply you need and purchase accordingly. 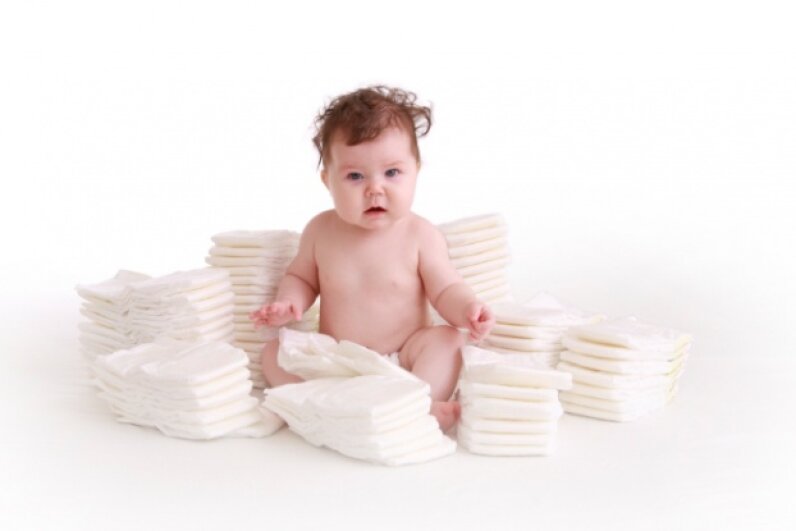 Diapers are a huge expense for parents of any child not quite potty-trained so buying them in bulk can be a big money saver. iStock/Thinkstock

Any parent knows that diapers for a newborn baby can be a huge expense. Child rearing information site babycenter.com estimates that the average baby's diapers cost about $1,100 in a single year [source: Baby Center]. At a warehouse store, or by waiting until your local grocery store has a sale before stocking up, you can save in the neighborhood of 25 to 35 percent of those costs, resulting in more than $350 in annual savings [source: Switchyard Media, Wallet Pop]. But don't let your purchases outpace your baby's growth and don't buy too many bulk packages all at once. Wait until your baby has just graduated to a new size to stock up. 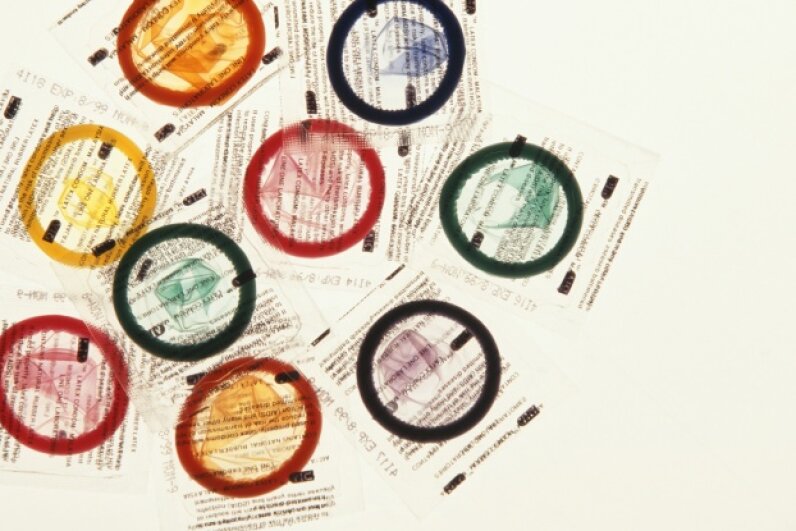 Condoms usually last for years after manufacture, so they're not likely to go to waste. Photodisc/Thinkstock

For the sexually active, keeping a supply of condoms on hand is a good way to avoid embarrassing situations, like being forced to run out to the store in the heat of the moment. Another advantage to stocking up is saving money. Condoms can be expensive, but the more condoms you buy, the cheaper they usually are. For example, a recent price comparison revealed that a pack of three Trojan-Enz condoms sells at retail for about $5.99, or about $1.99 per condom [source: Walgreens.com]. A 36-pack of the same brand can be found on Amazon.com for only $11.95 or about 33 cents per condom [source: Amazon.com]. Costco sells a 40-pack for only $9.99 [source: Costco.com]. Condoms generally don't expire until four or five years after they are manufactured, so they likely won't go to waste [source: Trojan Condoms].

Read on for more information and tips on how to improve your shopping habits. 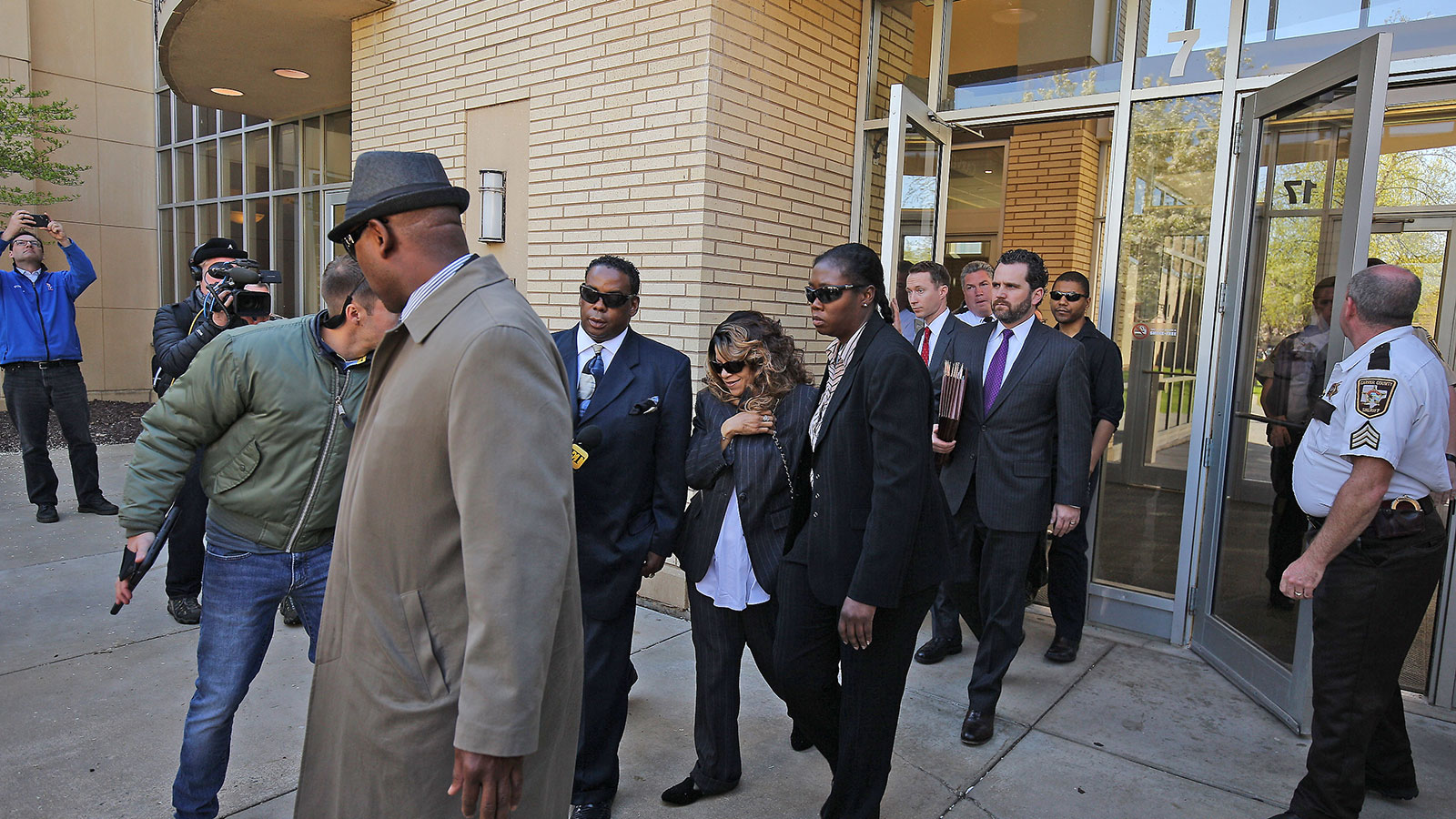 What Is Probate and Can You Avoid It?

If someone dies without a will, their survivors may end up in a long expensive fight in probate court.