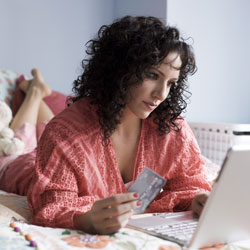 Back in the not-too-distant past, people in search­ of gifts were required to shower, dress and brave cold winds and irritated fellow shoppers to choose holiday gifts. Fervent deal seekers impatiently awaited store openings on Black Friday (the day after Thanksgiving) like idling engines awaiting ignition. Children flipped through toy store catalogs like doe-eyed automatons, leaving them conspicuously open to certain pages in the hope that the catalog would somehow accompany their parents to the mall. It was a nasty, brutish time. Uncertainty reigned.

Help would arrive in the late 1960s when computer scientists at the U.S. Department of Defense created ARPANET -- the predecessor of the Internet. We didn't know it at the time, but holiday shopping would never be the same again. We didn't have to go the store anymore! Instead, companies opened virtual stores online. Consumers could make their purchases day or night, respectably clothed or completely naked.

­Like most paradigm shifts, the advent of online shopping brought changes to the status quo. In stores, one need only keep vigilant guard of one's wallet to ensure its security; not so online. It's exponentially easier to assert one's will over temporary seasonal help when returning an item in stores. Again, this is not so online.

In this vein, HowStuffWorks has laid out five simple tips for online shopping. We begin on the next page.