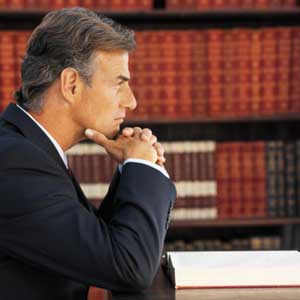 You've decided to become a lawyer. Now you just have to figure out how on earth you're going to pay for it.
Stockbyte/Getty Images

It's doubtful any other occupation has been singled out as ruthlessly as lawyers by the jokesters of the world, whose punch lines typically roast the soullessness and greed of attorneys everywhere. There are even jokes about the jokes. But despite the fact that they're setting themselves up to be the brunt of a stream of sarcastic wisecracks, lots of people are still interested in working as lawyers. As of 2008, in fact, there were 759,200 lawyers in the United States, a number expected to rise to a projected 857,700 lawyers by 2018 [source: U.S. Department of Labor].

For all those who were salaried in 2008, the median annual wages were $110,590 [source: U.S. Department of Labor]. Incomes like that probably help with a forced chuckle when it comes to all the weak witticisms at lawyers' expense. But when it comes to actually paying for law school, that's no laughing matter for prospective lawyers. Around 80 percent of all law school students end up taking out loans to help foot the bill -- which can range from a few thousand dollars a year to more than $50,000 a year, for tuition alone [source: Law School Admission Council]. Once you consider books and transportation, on top of regular living expenses, the overall cost to attend law school can quickly creep into the six figures.

If you're still sold on the idea of spending three arduous years and copious quantities of money on a legal education, at this point you're probably wondering how to cover the cost until you're pulling in six figures of your own. Well, for the full run-down on all the different types of college financial aid and how to secure them, check out How College Financial Aid Works. On the next page, we'll discuss some of the most common ways people pay for law school in particular and what you can expect in the process. 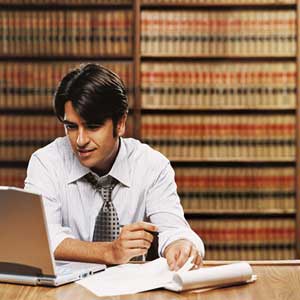 Start your hunt for financial aid even before you get accepted.
Jim Arbogast/Digital Vision/Getty Images

Most people can safely assume three years spent at law school is going to mean they'll be departing with some level of loan debt, but there are a number of approaches to help bring down the eventual balance. Scholarships, grants, fellowships and work study programs are sometimes options, and they can be both need-based and merit-based.

It's a good idea to make a solid effort to see what's out there; at this point, every dollar counts. Some companies also offer tuition reimbursements, so if you think you can handle working a job with sweet benefits while attending law school at the same time, that could be a possible source of funding.

To get things rolling, file your Free Application for Federal Student Aid (FAFSA) form as soon after the first of the year as possible, and start to follow up on all the potential leads for financial aid you've uncovered at this point. There's one important thing to note about FAFSA before we move on: While attending undergraduate school, most students must include their parents' financial information on the FAFSA form because it's a deciding factor in determining how much financial aid they're eligible for. Although law students are considered independent from their parents, they may still need to provide that information for the school to evaluate and decide on the details of their entire financial aid package.

Once you receive your acceptance letters and decide which school you're going to attend, the ball really starts rolling. Find out what to expect on the next page.

After filing your FAFSA form and getting accepted by your choice institution, you'll want to proceed by coordinating your financial aid efforts with your chosen law school's financial aid office. Visit sooner rather than later -- before other students snap up all the available money. Advisers at the office can tell you what types of aid you're eligible for, what the deadlines are and if you need to fill out any forms beyond the standard FAFSA form. It's good to get some idea of what you're getting into, so ask questions about their average graduate's loan debt and starting salary range.

While some lucky students will end up getting all of the money they need upfront through their schools (and it should be noted that some law schools are more generous than others, which could be a factor in your school selection process), the rest must usually turn to means besides grants and scholarships to cover the cost; namely, loans that eventually have to be paid back. When it comes to loans, there are typically two primary sources -- federal and private. You might very well end up having to make use of both.

On the next page are links to lots more information about the steps for becoming a lawyer -- and about paying off the mountain of debt that may come with it.