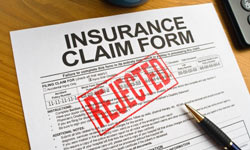 Insurance fraud is increasingly widespread, but agents have a variety of means for thwarting it.
©iStockphoto.com/KLH49

Insurance fraud is a bigger problem in the United States than you might guess. And the people who commit it are increasingly creative. While there are plenty of common scams out there -- like pretending you lost an expensive piece of jewelry, then filing a claim -- fraudsters also perpetrate scams by, say, staging accidents. For example, a motorist in front of you will suddenly hit the brakes in the hopes you'll hit him and he can fake an injury. Or someone will craft a fake vehicle title or registration for a nonexistent (but expensive) antique or luxury car, then report the car stolen and file a claim.

Such rip-offs cost Americans tens of billions of dollars a year. And unfortunately, they've become more prevalent, thanks to a sour economy that's causing some people to resort to desperate measures to bring in a little cash. Auto insurance fraud, for example, has risen dramatically -- and so has the number of people who believe cheating their auto insurer is acceptable [source: InsWeb].

However, while insurance fraud may be widespread, it's certainly not being ignored. Insurers are constantly working to thwart fraud through a wide variety of means -- including the 10 listed here -- and adjustors are quite adept at spotting suspicious claims. Submit a fraudulent one, and it may mean a hefty fine or the slammer for you.

Submitted a lot of claims during your lifetime, or claimed a lot of losses? Those are immediate red flags, and anything you submit will be closely scrutinized [source: Theim]. This is especially true when it comes to homeowners and auto insurance; one of the most popular schemes cooked up by average people (meaning non-professional crooks) is to report their cars missing [source: Theim, Insurance Networking News].

Insurers also try to discern any patterns in your past claims regarding their frequency and type. You may not realize it, but insurance companies keep in-depth records on claims and do all sorts of analyses to interpret the data they contain -- everything from figuring out who is most likely to file a claim to when and where. If your claim doesn't match the typical pattern, they'll notice [source: Money Q & A]. 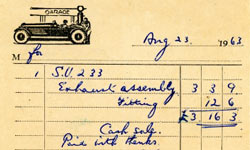 Handwritten receipts for repairs can sometimes be indicators of fraud.
©iStockphoto.com/whitemay

The National Insurance Crime Bureau (NICB) -- did you even know there was one? -- has developed a super-secret list of 23 "suspicious loss indicators." These are items within a claim or its circumstances that signal the claim may be fake. Bogus. A rip-off. OK, the list really isn't "super secret," but a lot of the people submitting fake claims don't realize this list exists, and that it may lead to their downfall [source: Theim].

Here are just a few of the suspicious loss indicators insurance agents look out for:

Of course, some of these scenarios can be present in legit claims. But don't worry. Insurers know they're not positive indicators of fraud -- just possible ones -- and definitely signs they should further investigate certain claims [source: Theim].

In the movies, you'll often see someone faking whiplash after a car accident. After the person gives a false statement to authorities, the movie cuts to the person at home -- sans the big foam collar -- engaging in an athletic endeavor that would be impossible if he or she really had whiplash. Next scene: A private investigator, hiding in the bushes, snaps a photo of the "victim" and takes off.

That's not just the stuff of Hollywood. Private investigators do stake out insurance claimants at times for just such reasons. They also use less dramatic tactics to uncover fraud, such as researching claimants' backgrounds through perusing criminal records, interviewing claimants and any witnesses, inspecting pertinent sites, etc. Investigators may also consult with the insurer's legal counsel and serve as expert witnesses in court. While some private investigators are hired by insurance companies on a freelance basis, insurers also hire in-house PIs, often selecting those with backgrounds in law enforcement and private investigation [source: Bureau of Labor Statistics]. 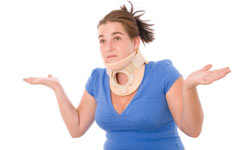 Certain medical providers or lawyers may involve you in insurance fraud scams.
©iStockphoto.com/tap10

One of the more popular insurance fraud scams involves vehicle crashes that result in both legitimate and fake/exaggerated injuries. The scam can work in many ways. Say you're in a car crash and your back hurts. You go to the chiropractor, who improperly bills the insurer for nonexistent injuries. Then, maybe lawyers swoop in and persuade you to let them start negotiations for a settlement based on your "extensive" injuries. You end up being part of the scam, but unwittingly. Other times, accident victims are asked to participate in such a scam in return for a cut of the profits.

Typically, those involved in such practices -- certain medical providers or lawyers -- will perform the same scam over and over. If insurers notice a particular provider submitting numerous claims over time for accident victims that coincidentally receive a similar treatment regimen, that's a big red flag [source: Barrett].

Fraud often occurs through billing, and quite often for medical claims. Physicians or clinics may bill insurance companies for services never rendered, for example, or for procedures or services that weren't medically necessary. Or they may jack up the cost of certain services, charge more than once for the same service or "unbundle" claims -- billing, say, for three separate surgeries on a patient whose three toes were operated on at the same time. Complex computer systems have been developed to tease out suspicious bills and billing patterns from physicians and medical establishments [source: Barrett].

But billing fraud isn't limited to medical claims. Auto repairs are another area rife with billing fraud. When some insureds discover their car insurance will cover the cost of repairing their dented hood -- after they pay their deductible -- they'll approach their repair shop and see if the cost of their deductible can be added to the bill. Wink, wink, nudge, nudge. Most reputable shops will refuse, of course, but there are plenty willing to comply [source: Insurance]. Or the shops themselves will, say, slap a reconditioned bumper on your car, then bill your insurer for a new one. Again, in these situations, insurance companies' computer systems can pull up claims where repairs appear inflated, or don't square with other claim information. 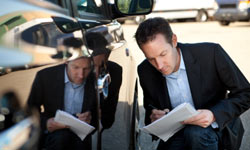 SIU employees may investigate damaged vehicles to see if the resulting dents and scratches jibe with the accident report.
©iStockphoto.com/BartCo

Many insurers have Special Investigation Units, or SIUs. Employees who work in SIUs generally have backgrounds as detectives, police officers, medical personnel and the like. They're capable of performing an amazing array of tests and checks to bust anyone trying to commit fraud. Here's just a sampling of what they can do:

Insurance fraud isn't limited to external sources. There's a certain amount of it that originates with insurance companies' own staffs. Claims adjustors cut a lot of checks, and unethical folks may try to skim a few bucks off the top. Agents can commit fraud by "stealing" customers' car insurance or life insurance premiums. The agents take in customers' money, then pocket it without ever actually purchasing the policies. Savvy insurance companies try to prevent such fraud by running credit checks on all prospective employees. Applications from those with bad credit or financial issues are flagged as those more likely to commit fraud [source: Khalfani-Cox].

Check on Claimants Through Social Media 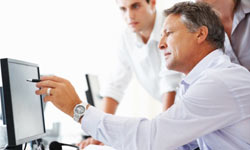 Much like the private investigator who spies the supposedly bed-ridden claimant salsa dancing the night away, insurers are now using social media to check up on suspicious claims. Perhaps the claimant who said his car suffered hail damage will be bragging about his deception on Facebook or Twitter, or will upload a video on YouTube showing how to create fake hail dents in your car's hood. Who would be that stupid? Luckily for insurance companies, plenty of people. Social media's biggest application in claims fraud, though, is in disability cases. A quick look at a claimant's Facebook photos and postings often makes it clear whether the person is truly disabled [source: McRee].

Insurance fraud isn't just a problem for insurance companies. It's your problem, too. According to FBI statistics, non-health insurance fraud costs $40 billion annually, which you cover by paying annual premiums $400 to $700 higher than they'd be if there were no fraud at all [source: Theim].

Outraged? Insurers sure hope you are. They're also increasingly vocal about asking their customers to help them out by taking the following actions: 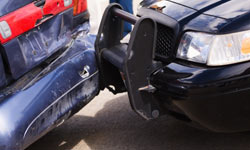 One of the easiest ways for insurers to catch crooks is via a basic cross-check. All this involves is looking for simple patterns in the checks they're sending out to pay claims. If the same person is receiving numerous checks, that's a warning sign. So is the payment of several big claims to the same address, even if the name on the check is different. It's not rocket science, but it works [source: Khalfani-Cox].

Cross-checks aren't limited to an insurer's database, either. Thousands of insurance companies, self-insured entities and third-party administrators report all of their claims to ISO ClaimSearch, an anti-fraud information system. The system was created by Insurance Services Office, Inc., and covers auto, property and liability claims. Cross-checking a new claim against all of those in this database (+100 million) makes it easier to sniff out staged-accident rings, finger those submitting multiple claims for the same loss and other scams [source: Ashtabula Insurance].

Several years ago, I worked for an insurance company. That was when I learned insurers employ special teams of people whose sole job is to ferret out fraud. I was shocked. I had no idea insurance fraud was so prevalent. And when writing this article, I was further shocked to discover some of the more dramatic means people employ to commit fraud. Staging car accidents? Faking the existence of a luxury car that gets stolen? Luckily, insurers are fighting back. And we need to be vigilant, too -- because our premiums are on the line.