Browse the article How Pawnshops Work 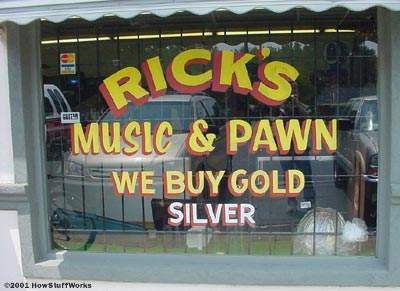 Pawnshops can be found in nearly every town, big or small. See more debt pictures.

Have you ever been to a pawnshop? For a lot of people, there seems to be something, well, shady about these places. But if you haven't been to a pawnshop, you may be missing out on some great bargains. A pawnshop is a lot like a dozen garage sales and a flea market all rolled into one. Pawnshops also play an important role in many communities by providing people with an easy, fast way to borrow small amounts of money.

There are three things that happen in any pawnshop hundreds of times every day:

In t­his article, you will have the chance to learn exactly what is going on behind the scenes at a neighborhood pawnshop as we visit Rick's Music & Pawn and talk to its pawnbroker, Gale Ausley. You'll realize that at the heart of a pawnshop is a fantastic lesson in economics! We'll also look at the most commonly asked question about any pawnshop: "Is the stuff in here legit?"

Our thanks to Gale and Brian Ausley, pawnbrokers at Rick's Music & Pawn in Dunn, NC, for their help with this article.

­Pawnshops and pawnbroking have been around for thousands of years. The basic idea behind any pawnshop is to loan people money. It goes like this:

As defined by the North Carolina General Statutes, 91A-3:*

In the next section we'll discuss an example of a pawn shop transaction.

How Much Will You Give Me... 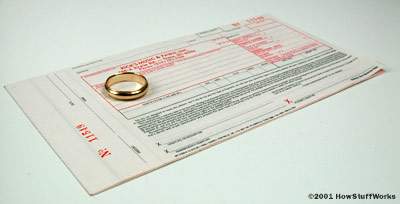 Your jewelry might hold special value to you, but you'd be surprised to learn of what little value it is in a pawnshop.

­­To try this out, I went to Rick's Music & Pawn and asked, "How much will you loan me for my wedding ring?"

It's a nice wedding ring -- a standard gold ring with my wife's name and our wedding date engraved inside. Bought new in 1994, the ring cost about $140.

In return for pawning my wedding ring, I would receive $10 and a pawn ticket. The ticket would indicate the following:

That, in a nutshell, is the basic pawnshop transaction. In a busy pawnshop, that sort of transaction happens hundreds of times every day. In many communities, the pawnshop is pretty much the only easy way to borrow small amounts of money. If you need $100 to make it through the week to your next paycheck, where are you going to get the money? A bank is not going to touch a small loan like that, and even if it did it would take a week or two to process the application. A pawnshop is a quick, easy way to get a loan.

Is This Information Correct?

­Pawnshops are regulated at the state level in the United States, and every state has different rules. Some of the details are absolutely fascinating! As an example, let's take a look at how a pawnshop works in the state of North Carolina.

Pawnshops are a business just like any other. But unlike many other businesses, pawnshops have a special set of laws that keep them on the straight and narrow. Pawnshops are specially licensed, and it turns out that they have to cooperate with police on a daily basis to prevent the movement of stolen merchandise.

When you pawn an item, the pawnbroker takes your name and address, verifies it with your valid driver's license and then inspects the item carefully. Most pawnshops have the ability to test diamonds and gold for authenticity. If you are bringing in something like a TV or VCR, the pawnbroker tests it to make sure it works properly. If there is a serial number on the item, it's also recorded on the pawn ticket. In the next section we'll examine the reasons a pawnshop must complete paper work on each item.

­North Carolina privacy law requires pawnshops to keep all nonpublic personal information private. They also have to give each customer a "Customer Privacy Notice." What does this mean? If a thief sells your stolen television to a pawnshop and you come in and see it the next day (and validate it with the serial number), the pawnbroker cannot tell you who brought it in, or even when the TV was brought in and sold. He must direct you to the police, who will investigate your claim. 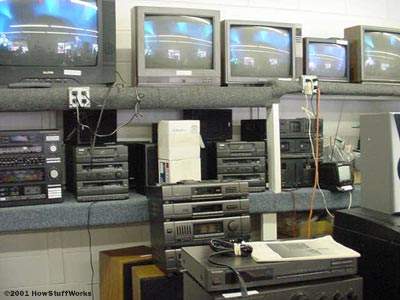 This is the part of the store you can see ...

A­s we mentioned in the last section a pawn shop must complete a lot of paper work for each item they acquire. There are three reasons for this level of scrutiny:

­When you walk into a pawnshop, you are really seeing only half of the operation. The actual shop is twice as big as the part you walk around in. The unseen part is the storage area for all of the items in pawn. Let's say that you pawn your TV -- the pawnshop has to hold it for a minimum of 90 days. For those 90 days, your TV sits in storage. This allows for any claims of stolen property to be investigated by the police.

­­What about the interest rate? In North Carolina, the maximum interest rate that a pawnshop can charge is 2 percent per month, or 24 percent per year. That's about the same as some credit cards. However, a pawnshop can also tack on other charges, such as handling, appraisal, storage and insurance fees. The maximum allowed charge for these additional fees is 20 percent per month. In addition to the 20-percent cap (which does not include the 2-percent interest cap), there are the following total (interest plus fees) limits:

­­In practical terms, this means that the maximum loan that someone can get at a North Carolina pawnshop is about $500. Even with this regulated fee structure, the interest rate still works out to well over 100 percent annually. In North Carolina, you have to pick up the collateral and make a new loan on it after six months, or else the collateral becomes the property of the pawnshop (and the pawnshop can sell it). 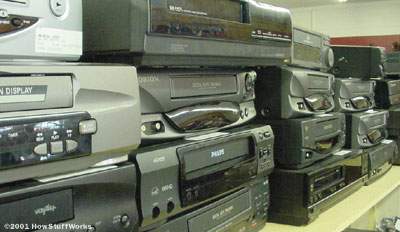 When they first came out in the mid 1980s, VCRs were pretty expensive. Today, you can buy a used one for less than $40!

­From the pawnbroker's standpoint, a pawnshop is simply a business. According to Ausley, the idea is to "loan out about one-third of what I think I can get for the item when I sell it." If an item is priced at $100 new, and the pawnbroker thinks it will sell for $60 used, then the loan amount would be $20. The pawn ticket for this item would ask for $24.40 (2 percent interest plus 20 percent in other fees) in 30 days.

Part of the art of being a pawnbroker is having a sixth sense about how much things are worth both new and used. "When you are starting out, there are books you can use, but those books are no good," says Ausley. As an experienced pawnbroker, Ausley gets most of his information about prices by walking around stores and looking at catalogs, and also by talking with other pawnbrokers. The real experience comes from buying and selling things every day. He's been in the business for 15 years.

Joining a rock band? Before you spend money on a new Fender electric guitar, check the instrument supply at your local pawnshop.

Electronics are a special problem. The prices for new electronics are falling constantly, meaning that used prices are also falling. When the economy is down, lots of people are pawning things and not many people are buying. This helps to explain the high interest rates to some extent. The pawnbroker has real cash going out the door when he makes a loan, but has only the used merchandise to sell to recover that money if the loan is not repaid. Used merchandise is not the Rock of Gibraltar when it comes to investment vehicles.

"An ideal customer is someone who comes in and pays the interest every 30 days, or picks up their item every month and repawns it if necessary," says Ausley. 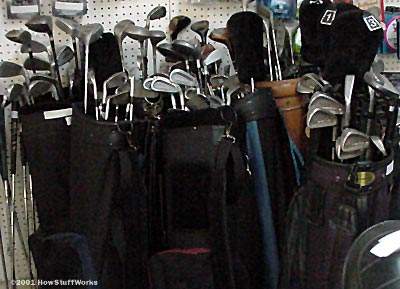 For a beginning golfer, or for the golfer with a discriminating eye, pawnshops can give great deals on clubs.

­B­ecause many of the people never pick up the items they pawn, a pawnshop is a consumer store as much as it is a lending institution. People also come in and sell used items outright to the pawnshop.

This makes any pawnshop a huge, daily garage sale! Some of the things you typically find in a pawnshop include:

Although you can get great deals on jewelry at a pawn shop, you have to know how to pick a "diamond in the rough."

According to Ausley, "a pawnshop is a great place to buy jewelry!" You generally pay about half the retail value. Worried about authenticity? Bring an appraiser with you. Since jewelry is often the most valuable thing a person owns, it is one of the most commonly pawned items.

You will also find random things you might not expect to see at a pawnshop -- saddles, for example. And wheel chairs, motorcycle leather, bicycles...

From chain saws to bicycles, you'd be amazed at the random things you can find at a pawnshop!

Often, a pawnshop has a specialty, and the shop sells new merchandise in that area. For example, Rick's Music & Pawn sells both new and used instruments, speakers and other music-oriented items.

Anything of value that you can find at a garage sale is probably for sale at a pawnshop near you. Be sure to haggle!

For more information on pawnshops and related topics, check out the links on the next page.