Does the United States Have a Free Market? 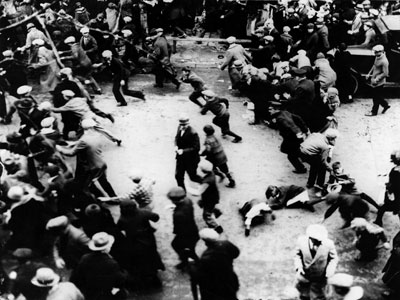 Violent strikes, like this one in Passaic, New Jersey, in 1926, led to new federal labor laws. Depending on your view, the government either protected American workers or leveraged unrest to gain control over business.
Topical Press Agency/Getty Images

One of the tenets of capitalism is that a free market fails from time to time. The market should be able to correct itself by ridding itself of the poorly performing businesses and investments that dragged it down. But the United States has a long shown a lack of faith in the free market's natural correction mechanism.

In times of financial crisis, the United States has customarily turned to capitalism's antithesis -- socialism -- to artificially correct the markets. The very existence of the Securities and Exchange Commission (SEC) alone indicates the U.S. economy isn't a free market. For the first 116 years after it was established in 1817, the New York Stock Exchange operated without government regulation. Following the crash on Oct. 24, 1929, the federal government held hearings that revealed the types of fraud corporations used to mislead and swindle investors. These hearings led to unprecedented government oversight of the stock market. For one, corporations now had to file earnings reports with the newly formed SEC, which had the ability to audit these companies [source: Berenson].

But the SEC's formation in 1934 was hardly the U.S. government's first foray into business. By the end of the 19th century, the government concluded that major corporations such as Standard Oil, Carnegie Steel and Union Pacific Railroad had grown too powerful. As a result, a spate of laws and bureaucracies were created to offset this power. The Sherman Antitrust Act of 1890 outlawed monopolies. The Food and Drug Administration was created in 1904 and vested with litigation of companies that broke new purity laws. The Federal Trade Commission was created in 1914 to regulate competition among American companies. The Fair Labor Standards Act of 1938 established a national minimum wage for workers (25 cents an hour) [source: Dept. of Labor]. Under a pure capitalist system, none of these laws or entities should exist.

­­Essentially, each act limited markets by granting the federal government the power to regulate business. As a result, the United States no longer has a free market system. Instead, the United States now has a managed economy -- by definition, a nonmarket economy since it doesn't exist solely on supply and demand [source: Merriam-Webster].

These government regulations are constant -- even in periods of calm and prosperity. But they tend to emerge during times of crisis; the market crisis of 2008 is a good example of a managed economy in action. In addition to the interventions already mentioned -- like the takeover of Mae and Mac and the buy-in of AIG -- the U.S. government also called for further steps to artificially correct the market. In September, a $700 billion bailout was proposed. In the wording of the plan, the government would take unprecedented control of the market. Not only would it intervene by purchasing businesses, it would also temporarily nationalize some of them and control how they're governed. One provision stipulates how much compensation these companies can offer their executives after the government purchases their bad debt [source: U.S. House].

Whether it's favorable that the United States has a managed economy instead of a free or socialized one is purely academic. It would literally take a revolution to steer a government toward either pole of the economic spectrum. Unlike corporations, governments can exercise their will virtually unfettered. If a government decides to intervene in a market, there's little anyone -- capitalist or socialist -- can do.