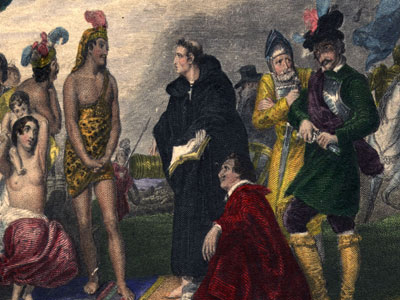 Rudyard Kipling's poem "The White Man's Burden" calls its European audience to "send forth the best ye breed" and "serve your captives' need." In other words, Kipling is telling well-bred Europeans they have a responsibility to help the people they conquered. The poem, now considered misguided and racist, sums up the curious and contradictory attitude Europeans had toward colonized peoples in the 19th century.

Missionary work in the 19th century struggled to reconcile colonialism and Christianity. As European powers spread their economic dominance and influence throughout the world, devoted Christians saw their opportunity to reach and convert "savages" -- that is, non-Christians. In their minds, this was the only way to save these remote people from eternal damnation (and in the process secure their own salvation). In addition, missionaries often worked to build hospitals and educate natives.

However, modern sentiment is that missionaries (those who set out to convert others to their religion) merely gave Europeans an excuse to rationalize their abusive economic practices. They are also accused of pushing Western ideas and customs while squelching native cultures. Today, many people tend to think of these missionaries as religious zealots who carelessly trampled on other cultures -- despite seemingly good intentions. Whether or not you believe missionaries deserve this reputation, it will help you better understand the role of missionaries throughout history and today.

So how did mission work begin? In the Gospel, Jesus asked his apostles to go out and "make disciples of all nations" [source: USCCB]. And, according to the Acts of the Apostles, Jesus' followers received their mission in a sweeping sign from God. On a day known as Pentecost, the apostles were gathered together, not long after they saw Jesus rise from the dead and then ascend to heaven. Suddenly, they heard a loud noise of rushing wind and saw "tongues of fire" come and descend on each of them [source: USCCB]. These tongues of fire gave them the ability to speak in different languages. Throughout the history of their religion, Christians (both Catholic and Protestant) have interpreted Pentecost as a call to spread their faith to people the world over.

Of course, Christians aren't the only kind of missionaries, but because they have been the most historically influential (not to mention controversial), they're the main focus of this article. However, we'll talk about missionary activity in other religions later on.