by Melissa Phipps
NEXT PAGE 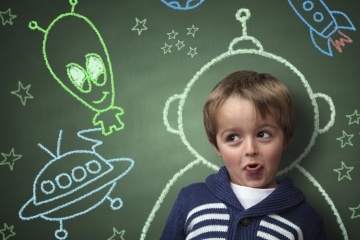 Kids can dream up some pretty awesome jobs, but can they keep the dream alive when they grow up?
BrianAJackson/iStock/Thinkstock

If you've ever asked a 5-year-old what she wants to be when she grows up, you'll probably recognize a theme. Astronaut, dancer, poet, princess, unicorn trainer — whatever the answer, it usually sounds like a lot of fun.

Fifteen or 20 years later, that sense of fun will likely be trumped by a sense of financial responsibility. It's almost a rite of passage to give up the idea that a grown-up job can be fun. But fun and money aren't necessarily mutually exclusive.

While it's true that many of the highest paying jobs are not what most people would call fun, there are also some very lucrative careers that seem like such fun it's hard to believe people get paid to do them. Think of Jimmy Fallon, for example, who reportedly makes $12 million per year hosting "The Tonight Show" and seems to be having so much fun he'd do it for free — almost [source: Longman].

To be sure, even in the entertainment industry, Fallon is an anomaly. The average member of the Screen Actors Guild makes $52,000 a year, and most actors bring in less than $1,000 for their efforts — if they can find work [source: The Hollywood Reporter]. The jobs in which workers claim to be happiest are far less glamorous, but most pay a decent wage. There are also plenty of jobs that pay next to nothing and are a real drag. And even jobs that once seemed like a lot of fun, once you're in them long enough, can start to feel like work.

Read on to find out more about the highest and lowest paying jobs in America, and discover what makes a job fun.