10 Telecommuting Careers That Can Make You Rich 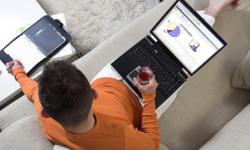 "Rich" is a relative term, but there are plenty of options these days for workers looking to telecommute. Read on to find out which might be right for you. See pictures of corporate life.
Photographer: Lajos Repasi | Agency: Dreamstime

What's the definition of the perfect commute? From the kitchen table to the couch. Working from home, or telecommuting, is no longer the stuff of cubicle daydreams. As of 2011, an estimated 20 to 30 million people worked at home at least one day a week, and at least 2.8 million people worked primarily from home [source: Telework Research Network]. With improvements in networking technology and changes in corporate philosophy, the right career -- and income -- might be closer than you think.

While "rich" is a relative term, researchers have identified how much money a person needs to be happy. According to researchers at Princeton University, those who earn $75,000 annually are generally satisfied with their lives. Earning less than $75,000, however, seems to introduce higher levels of emotional stress [source: Rubin]. To that end, we've uncovered 10 telecommuting careers in which you could earn $75,000 or more.

First, however, you'll need to steer clear of Internet "work at home" scams promising thousands of dollars a month for 20 hours of work a week, no college degree required. Remember that telecommuting is a benefit of a job, not the job itself. The best way to land a well-paying telecommuting job is to look for jobs that offer telecommuting as an option. If you're qualified for the position, then you might be able to negotiate a part-time or full-time telecommute, even if it's not an option at the time of your interview. Beginning on the next page, find out which careers made our list.