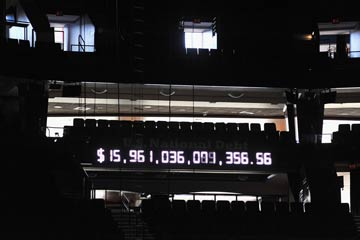 The National Debt Clock seen inside the Tampa Bay Times Forum before the Republican National Convention in August 2012. Back then the national debt was a mere $15.9 trillion.
Tim Boyles/Getty Images

It's expensive to run a superpower. In 2012, the United States federal government spent $3.54 trillion on everything in its budget, including defense, (the largest chunk of discretionary spending at $670 billion), Social Security (the largest of the mandatory expenses at $767 billion), Medicare and Medicaid, scientific research, grants for college students and much, much more. Unfortunately, the government only took in $2.45 trillion in taxes, fees and other revenue [source: Congressional Budget Office]. That leaves a budget shortfall of more than $1 trillion, and that trillion dollars is called the deficit.

In simple terms, a budget deficit is the difference between what the federal government spends (called outlays) and what it takes in (called revenue or receipts). The national debt, also known as the public debt, is the result of the federal government borrowing money to cover years and years of budget deficits. We'll talk more about the national debt on the next page.

Since 1973, the federal government has carried a budget deficit in all but two fiscal years, 1999 and 2000. But the massive deficits accumulated since 2009 have put all previous deficits to shame. In the wake of the global financial crisis, the federal government invested heavily to stimulate the faltering economy. The result was the first budget deficit to break $1 trillion in 2009 — $1.4 trillion to be exact — a full three times larger than 2008, the previous record holder [source: CBO]. Thanks to lower spending and higher tax revenue, the 2012 deficit was down to $1.1 trillion, the lowest in four years [source: Lowrey].

The deficit has been a political sticking point for decades. As the nonpartisan Congressional Budget Office explains, there are only two ways to lower the deficit: cut spending or increase revenue. But neither of those solutions is politically popular.

Two of the largest spending obligations of the federal government are Social Security and Medicare, popular programs that support senior citizens during retirement. With the aging of the baby boomer generation, the government will need to spend more on these programs in coming years, but cutting funding to seniors is political suicide.

The other option, raising taxes to shrink the deficit, is also wildly unpopular. To complicate matters, many fiscally conservative congressmen and women have pledged to never raise taxes, leaving little hope for a compromise between spending cuts and increased revenue.

So how does the government come up with the money to pay for programs it can't afford? Borrowing, of course. 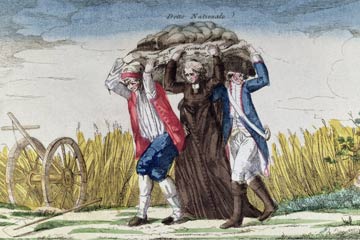 Why do we worry so much about the budget deficit and the national debt? Congress hasn't balanced a budget in decades, and the national debt keeps growing exponentially, but the United States is still one of the most prosperous nations in the world. What exactly are the potential pitfalls of living in the red?

According to a 2012 report by the Congressional Budget Office, there are several serious economic consequences associated with the ballooning national debt.

While politicians generally agree that large budget deficits and a runaway national debt are bad for the economy, they are sharply divided on how to solve the problem. The White House and congressional Democrats have proposed a mix of spending cuts and increased revenue in the form of higher taxes on the wealthy. A majority of congressional Republicans have rejected the idea of raising taxes and want to achieve deficit reductions through spending cuts and reform to the large "entitlement" programs of Social Security and Medicare.

Meanwhile, some prominent economists question the logic of paying down the national debt while economic growth is still weak. They think cuts in government spending will lead to job loss and a shrinking economy [source: Krugman]. Congress has to decide which is worse: derailing the economic recovery with short-term austerity, or threatening the fiscal future with piles of unpaid debt? Can congressional leaders strike a smart compromise? With a congressional approval rating of 13 percent in March 2013, the majority of Americans aren't holding their breath [source: Newport].

For lots more information on debt, budgets and national politics, check out the related HowStuffWorks links on the next page.

Buddy, Can You Spare a Trillion?

If you are appalled by the national debt, you can do your civic duty by helping to pay it down. Yes, the federal government has a website called Pay.gov, where conscientious citizens can make a "gift" to reduce the public debt.

Author's Note: What's the difference between the U.S. deficit and the national debt?

It must be kind of fun to work for the Congressional Budget Office. This independent, nonpartisan agency is assigned the task of predicting the economic effects of proposed policy decisions. While politicians of every stripe are stumping for their own deficit reduction plan, the whiz kids at the CBO are crunching the numbers and doling out the cold, hard facts. Make all the spending cuts you want and raise taxes on the rich, says the CBO, but unless some serious structural changes are made to Social Security and Medicare, the federal government will still continue to spend more than it has in the bank. In that sense, it must be a little depressing to work for the CBO. Because despite the bluster and hopeful promises of politicians, you know all too well that the math just doesn't add up.