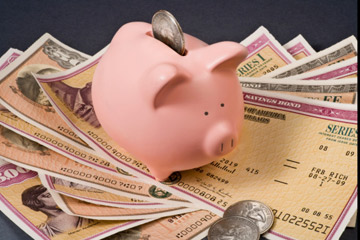 You might be richer than you think if you have "lost" savings bonds.
Peter Gridley/Stockbyte/Getty Images

We all know the scenario: As the season changes, you take your winter coat/light jacket out of the closet, reach into the pocket and find yourself the newly minted owner of that 20 dollar bill you forgot about six months ago. Now imagine that thrilling scenario re-written to include thousands of dollars, found in government coffers. While the first circumstance seems a lot more likely, you might be surprised.

The United States has been offering savings bonds since 1935, which were originally referred to as "baby bonds" because of the small denominations they were sold in. Used to finance the United States' efforts in World War II, savings bonds were seen as a patriotic duty and were purchased by tens of millions of families [source: TreasuryDirect].

So that's all fine and good, but what do savings bonds have to do with you finding lost money? Turns out, only some of those people who bought savings bonds years ago remembered that they had bought them. Beyond that, some people never even received a certificate and thus don't realize that there are bonds in their name.

It might sound like wishful thinking to receive a surprise check from the government, but there are $16 billion dollars in unclaimed bonds -- yes, that's billions, which is twice the size of millions. Furthermore, a successful search turns up an average of $1000, so it might just pay to read on for tips on how to find yourself some forgotten money [source: ABCNews].

If that doesn't whet your appetite, consider this: There's someone out there with 13,000 unclaimed savings bonds, totaling a $2.5 million windfall [source: ABCNews]. We suggest you continue on to the next page, where you'll learn how savings bonds work -- and how to find ones that are lost.